Starting a Martial Arts Program for Individuals with Down Syndrome 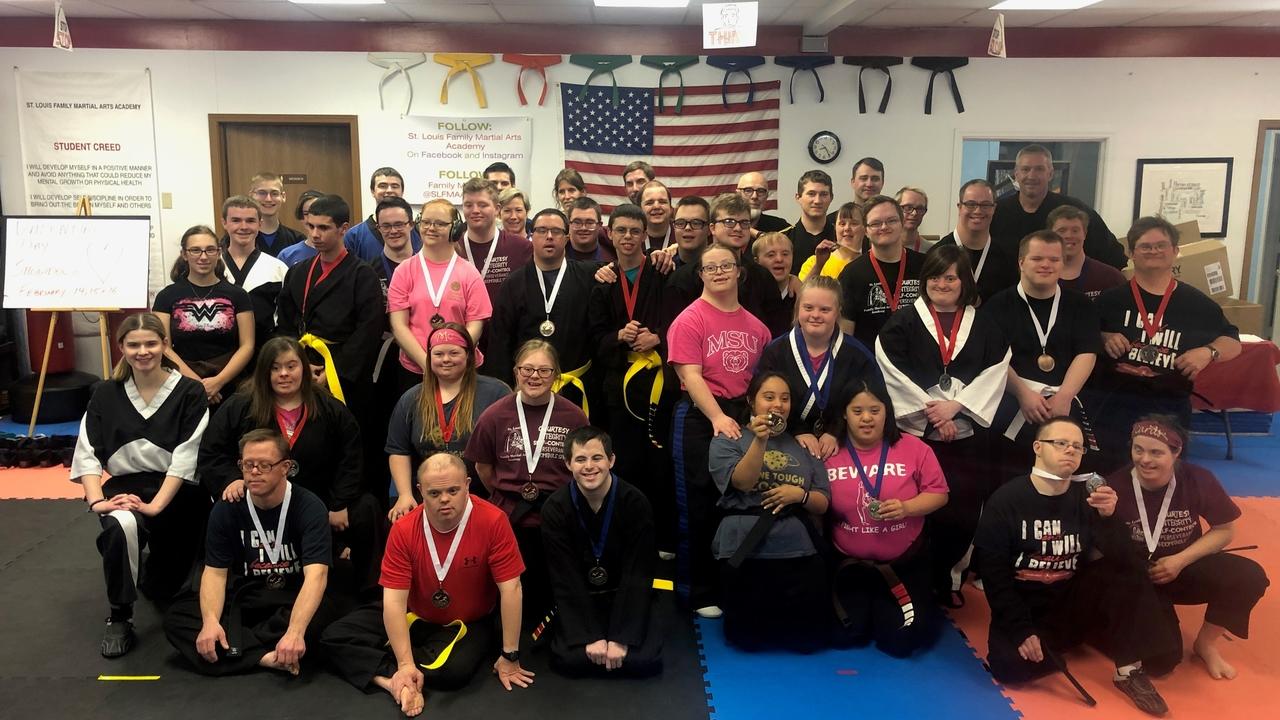 I’ve been training as a martial artist for 38 years. The last 28 of those I’ve also been a school owner. Over that time, I have had the opportunity to visit and network with countless other martial arts professionals. As an industry, we’re all aware that many of our students have learning disabilities or physical limitations, and that we have to be able to adapt our programs to allow them to benefit, while maintaining the integrity of the martial arts and our chosen way of teaching.

One of the things that I’ve learned over the years is that every student is unique. Each and every one of them has their own needs and goals. I’ve seen many schools, just like my own, train and develop elite martial athletes, successful adult students, children with learning disabilities, and those with special needs all within the same program.

October is Down syndrome Awareness Month, so this is a great time for me to get to share how we developed our program and how it has continued to evolve.

In January of 2010, Deidre Pujols asked me if I’d be interested in teaching a summer self-defense class for teenagers and adults with Down syndrome. After speaking with Todd Perry, CEO/Executive Director of the Pujols Family Foundation, we designed a six-week martial arts and self-defense class.

The purpose of the class was to teach some simple self-defense techniques to teenagers and adults with Down syndrome and make it a fun weekly activity for them. I’m not sure whether the students or me had the most fun! It immediately became something I wanted to be able to do long term.

Having had students in the past with Down syndrome, including my niece Katie, I already had some experience to build on. However, I knew I needed to do some research if I wanted to create a specific curriculum. I did lots of reading, consulted with physical therapists and educators, and learned as much as I could about both the strengths and limitations of someone with Down syndrome.

I continued teaching the summer program the following year and then in 2012 restructured the schedule in order to start a full-time class.

We currently have a beginner and an advanced class every Thursday evening. These are provided free of charge to teenagers and adults with Down syndrome and similar disabilities. While most of the students in our program have Down syndrome, others participate as well. There are currently over fifty students in these two classes combined. 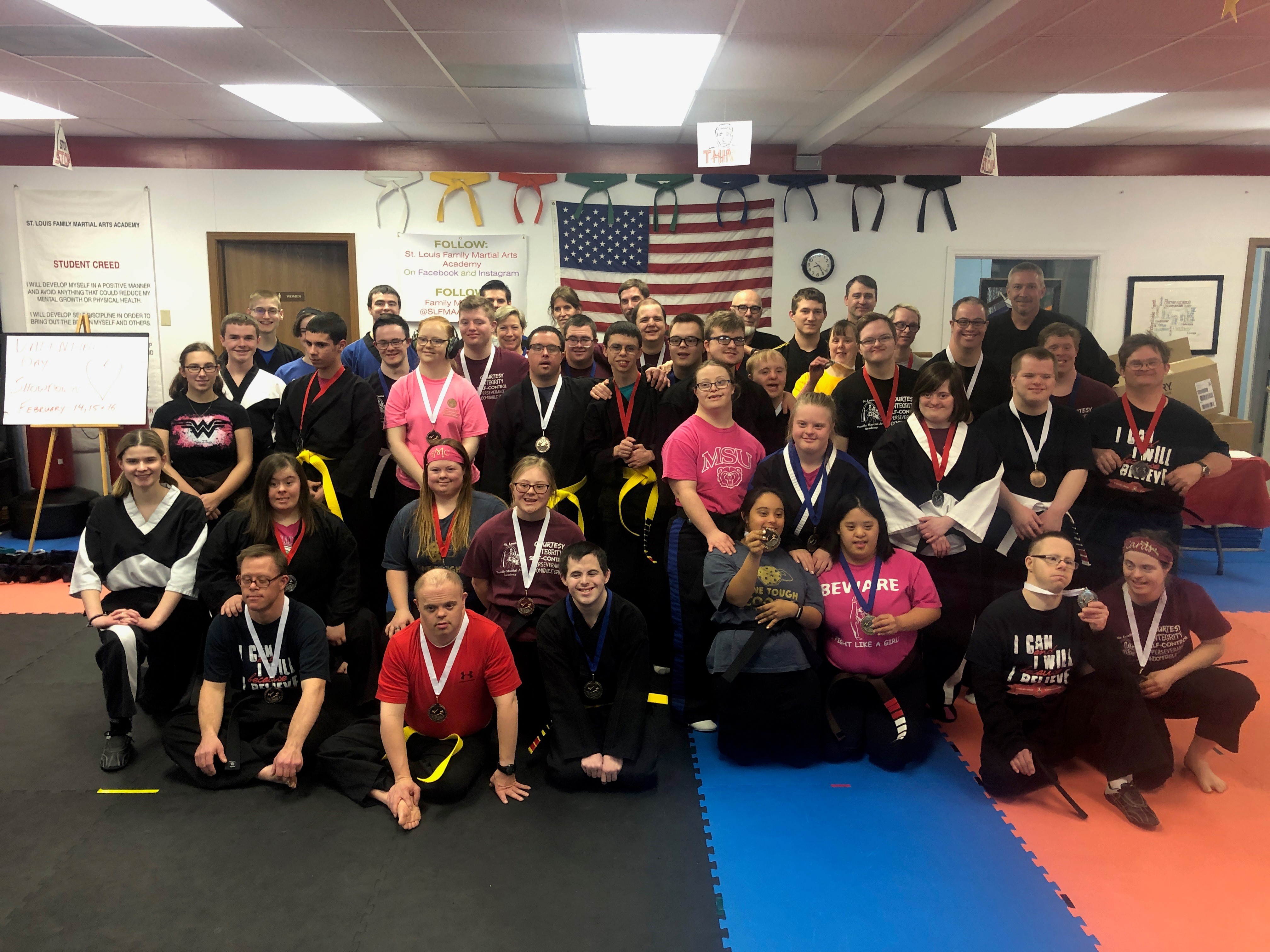 The nuts and bolts of the class are very similar to our typical martial arts classes but with some specific modifications based on the needs of our students with Down syndrome. It’s important to be aware of any health and safety concerns for individuals in the class as well. Students need to be able to follow one- and two-step commands and instructions.

Students follow the same class protocols as every other class. They collect their own attendance cards and line up and salute in. After that, we begin class! Our basic calisthenic warmup consists of a full upper body exercise of some kind. We usually do jumping jack variations or footwork drills. We then work on big muscles, balance squats, push-up variations, and so on! You can use your imagination here as long as you remember to be constantly aware of any special physical needs or concerns. 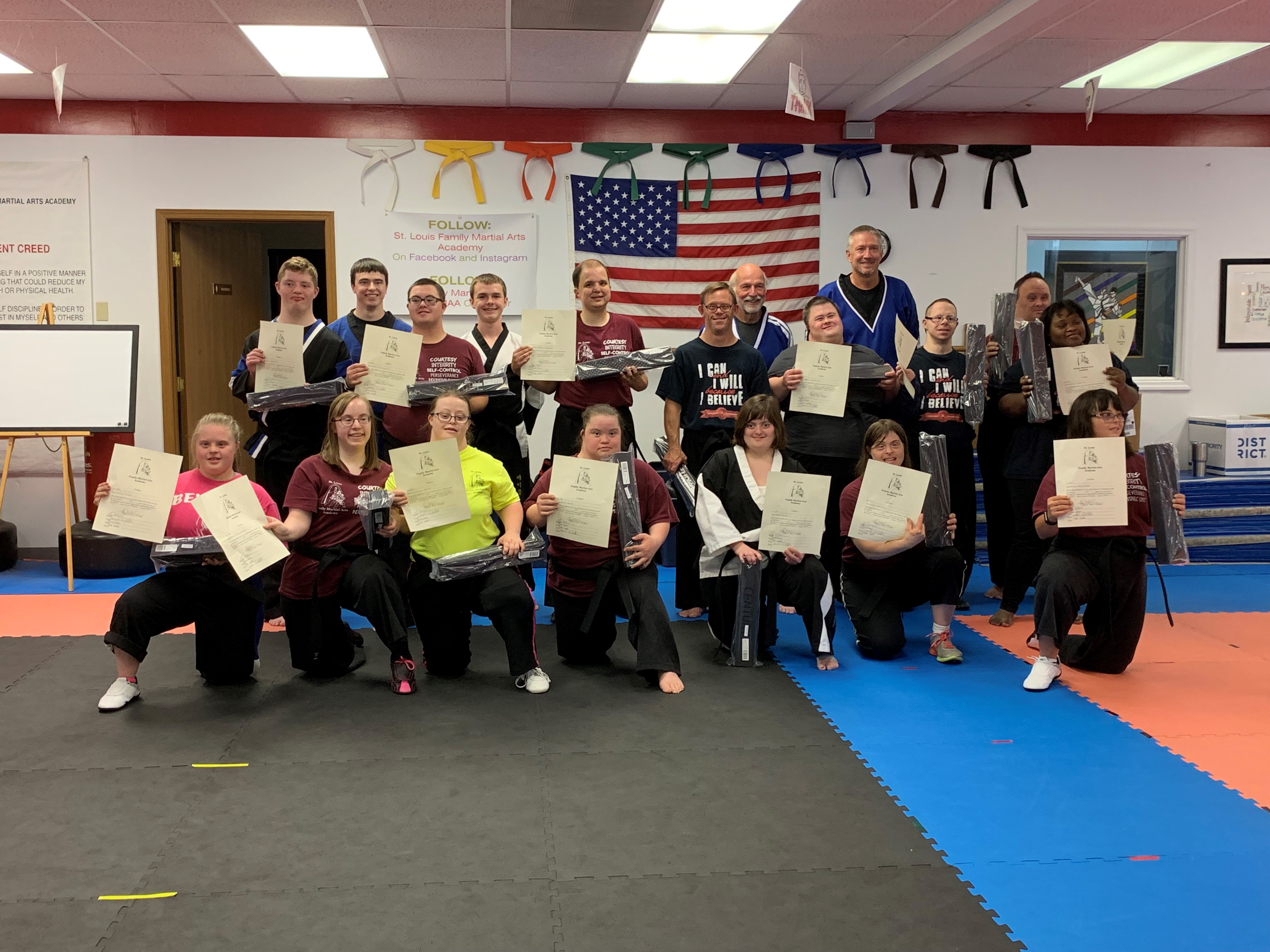 Some students will be able to do more things than others. A student with Down syndrome can have low muscle tone yet good overall strength, so we work hard at using strength-building exercises that also enhance flexibility.

The average attention span of an adult is eighteen minutes on any one theme. It’s important to know to move on before attention span wanes. For a student with Down syndrome, a child, or any student with learning disabilities, this time will be even shorter. We try to move on the to the next phase of class quickly (six to ten minutes) before that can happen.

After our short calisthenic warmup, we move into the teaching portion of the class. Many students with Down syndrome have impaired hearing, so most of them will be visual learners. It’s important to have yourself or someone else demonstrate as you teach. We follow a rotating curriculum that uses many of the same techniques we teach in our typical classes.

We avoid a lot of jumping and spinning because of balance and equilibrium concerns. For forms and pattern work we do the same patterns as we do in all of our other classes. However, we do modify them by shortening the patterns.

We finish with a fun high-energy drill that’s designed to teach or enhance a specific skill or attribute related to what we just worked on in class. You can use your imagination to create these drills, as long as you remain aware of each student’s needs. Balloons, obstacle courses, footwork, and movement drills are some of our favorites. We always make it a fun competition and sometimes the students get to compete against their instructors. The winner gets a prize every week: five push-ups is their prize! Our students take pride in being able to take on this additional challenge.

Following this method allows the student to earn a new belt every twenty-four classes. In our program it takes about five years for these students to earn their black belts. That may seem like a long time to some, but this is the length that best fits our students and our system.

It’s amazing what a student with Down syndrome can do. Our group of students is extremely dedicated, too. The very first class we ever held, we had had twenty-three students show up! After seven years, nineteen of those original students are still with us and have earned their second-degree black belts.

We also hold three special events every year that we spend class time preparing for in the weeks leading up to them. In July, year we have board-breaking week. We rehearse side kicks and board breaking techniques in every class for a few weeks prior. We start by holding focus pads like we’d hold a board for breaking. Then we then move on to Century’s yellow re-breakable boards. I find these to be the best balance of breakability and challenge for the students.

Provided the student can kick the focus pads and re-breakable boards with a good foot position, and I’m sure they won’t injure themselves, we then let them break Century’s 12x12x1/2 wooden boards. If we’re not 100% sure of their safety, we let them break the boards by stomping on them.

The second big event is an annual demonstration in January where the students have the chance to perform in front of a crowd. The last few years, we’ve had the privilege of performing during halftime at Missouri Baptist University and the Pujols Family Foundation’s Celebrity All-Star Basketball game where local and national celebrities, the Missouri Baptist Men’s and Women’s basketball team and the Pujols All Stars (All Star Basketball players with Down syndrome) compete against each other at an annual event in front of several thousand people. It’s very exciting to say the least!

The biggest event of the year is the Valentine’s Day Showdown. It’s our annual inter-school tournament where the students compete with each other in both forms and point sparring competition.

These events are exciting, but the most heartwarming and inspirational moments happen every Thursday evening in class. For me, this is as rewarding as anything I’ve ever experienced as a martial artist.

Obviously, we can’t run successful martial arts schools without being profitable. But one of the benefits of running a professional and profitable martial arts school is that it allows us the opportunity to develop and run programs like this. There’s certainly nothing wrong with doing classes like these for a fee and making them profitable. In our case, our relationship with the Pujols Family Foundation and the other successful programs in our school allow us to teach these classes free of charge.

I’d be happy to share any further information about this class with anyone interested in adding or further developing a similar program. I’d also love to hear from anyone doing similar programs and the experiences you have to share. 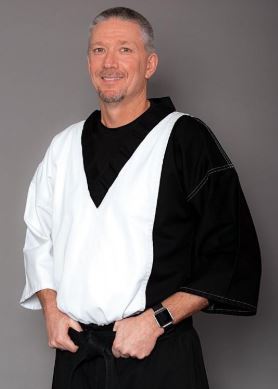 Dwight Trower began his martial arts training in 1981. He has trained primarily in the arts of Tae Kwon Do, Filipino Kali, Lee Jun Fan, Muay Thai, and Silat. Since 1991, he has been the owner and Director of Instruction at St. Louis Family Martial Arts Academy. In 2010 he began developing a standalone martial arts curriculum for teenagers and adults with Down syndrome and similar disabilities. In 2018 he was recognized as The Pujols Family Foundation Partner of The Year for his work in the martial arts and Down Syndrome community.

Dwight Trower can be reached by calling St. Louis Family Martial Arts Academy at 636-227-3098 or via email at [email protected]