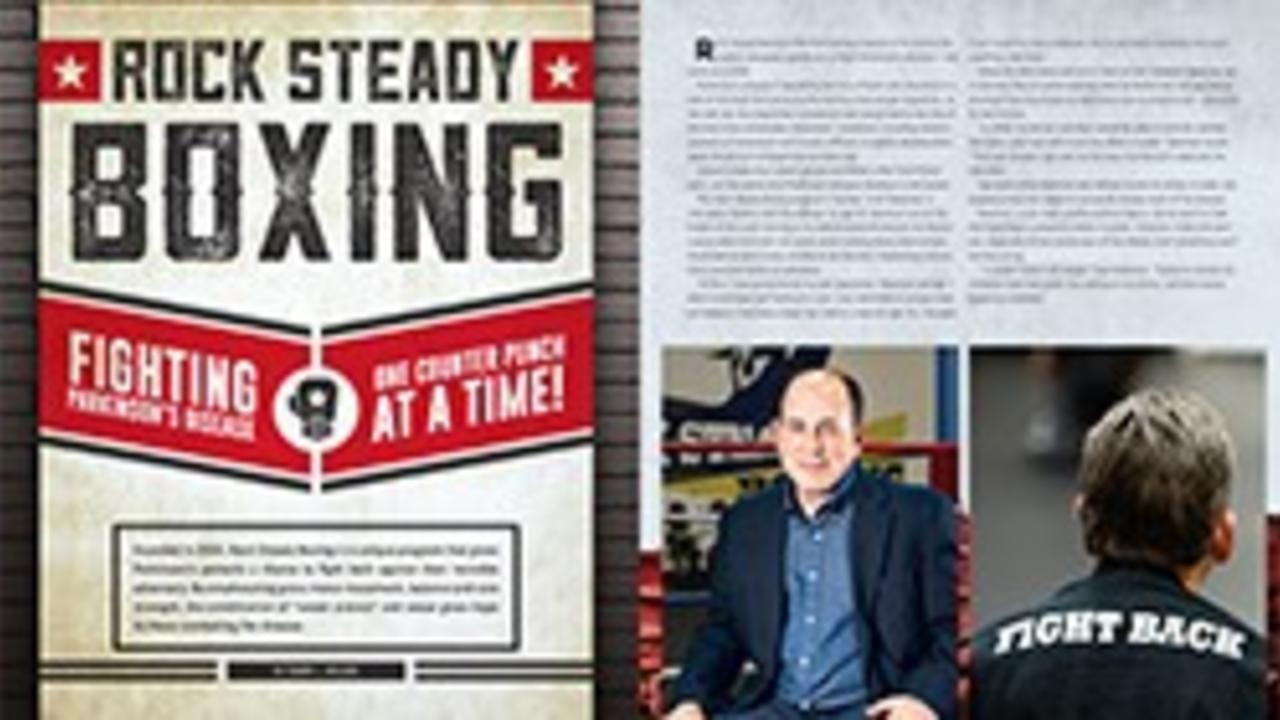 Founded in 2005, Rock Steady Boxing is a unique program giving Parkinson’s patients a chance to fight back against their invisible adversary. By emphasizing gross motor movement, balance and core strength, the combination of “sweet science” and sweat gives hope to those combating the disease.

At the age of 40, while in the peak of his career serving as an Indiana State Prosecutor for Marion County, Scott Newman was diagnosed with Parkinson ’s disease. His world came crashing down when he was blindsided by what many consider the most frightening disease that could ever befall an individual.

Newman did his best to hide the disease but two years after his diagnosis he began showing symptoms.

“I couldn’t hide it any longer,” says Newman. “Trying to conceal my condition from the public was adding to my stress, and that exacerbated my condition.”

One of Newman’s friends realized he needed a way to release his stress.

“So, he started teaching me how to box,” says Newman. “I wasn’t a boxer, but he insisted. After six weeks of very intense workouts, I saw a big leap in my ability to write and type. I could even sign my name again.”

Newman quickly discoverd with boxing he could slow the disease down. That newfound optimism led him to founding Rock Steady Boxing. He invited members of the Young Parkinson’s of Indiana to attend a free class.

“The workout lit a spark into these people, just like it did to me,” says Newman. “You can feel like crap most of the week. But, if you have one day where you can turn it around, one day that’s better than the last, then you’ve defeated the logic that was dragging you down. And that’s what Rock Steady Boxing is all about.”

At Rock Steady, patients of all ages, shapes and sizes don a pair of boxing gloves to do battle, not with each other, or even an array of leather punching bags. When these pugilists glove up, they are fighting time. And time is not on their side.

Newman and his team of experts created specific training programs for Parkinson’s patients that include agility, speed and endurance drills. These tailor-made workouts help improve hand-eye coordination, footwork and overall strength. The exercises vary in purpose and form, but share one common trait: they are rigorous and intended to extend the perceived capabilities of the patient.

Rock Steady is now in 405 facilities in 47 states and seven countries.

“What we do here is help people with quality of life,” says Kristy Rose Follmar, Program Director and Head Coach for RSB. “Most of the big companies working with Parkinson’s allocate their money to research.Of course, we’re big advocates on finding a cure, but all of the millions of dollars that are going into finding a cure doesn’t help our members walk into a house carrying a bag of groceries or to pick up a grandchild or even to button their own shirt.”

Doctors working with the program found it is not only safe but patients were actually getting better. A long-term study found participants of Rock Steady were able to walk faster and maintain a higher level of function than patients participating in other exercise activities. The study also found Rock Steady patients have a higher quality of life compared to those in other programs.