Professional Karate Schools of America: Born in the USA But Now Taking on the World! 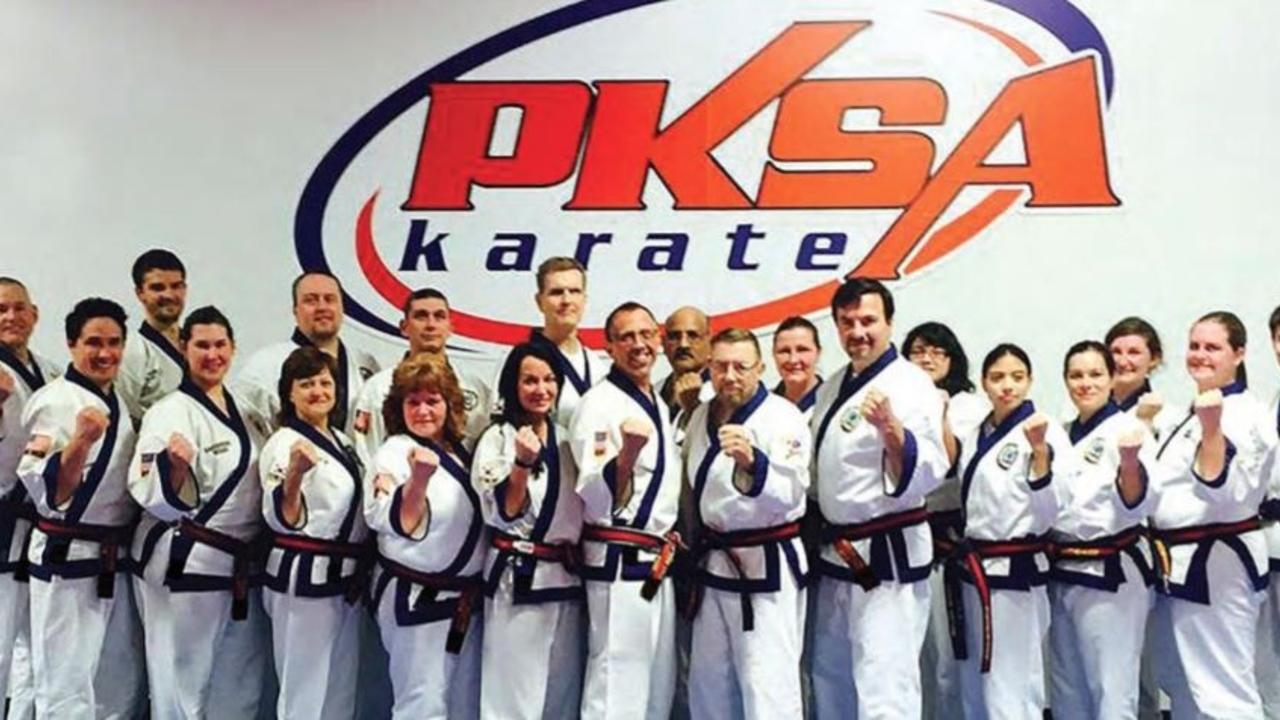 It’s not easy to have a large, successful franchise of martial arts schools run entirely by your own students, doubly so if you’re having those schools maintain a fairly traditional curriculum. But Professional Karate Schools of America, or PKSA, has managed to buck the odds and do just that thanks largely to the vision of its founder, Richard Collins Jr.

Collins, along with his father, started training in the Korean art of tang soo do back in 1969. After several years, they began running their own class in the basement of their house. The “school” became a very well-attended, if not prosperous, enterprise for them. Although they never advertised, classes were always packed thanks to word of mouth. The younger Collins was still working a regular job as an aircraft mechanic when a Korean master named C.S. Kim suggested he try teaching martial arts full-time.

“I had a passion to teach, so I decided to take the leap,” Collins said. “I quit my job and said, ‘Let’s try this in a commercial facility to see if it will take off.’ Within only a few months, I had made more than I made with the airline in an entire year.”

Although Collins found quick success when he opened that first commercial school, it wasn’t all smooth sailing for him. “I had to learn through experience, and a lot of the mistakes we made in the 1970s and 1980s we were still making even into the 1990s,” he said.

One of the biggest errors was letting the bank handle his accounts receivable, collecting large tuition payments up front. Besides having to give the bank a certain percentage of each transaction, Collins believes receiving a single lump-sum payment is not always the best way to run a school.

“You’re not getting any monthly receivables after the first payment, and if you spend it all up front, then you’ve got nothing coming in after that,” he said. “We tried doing it like that in the beginning, but I’ve never done it that way again.”

Collins recalls that when he opened his school in 1989 in his native Michigan, the martial arts weren’t big business there. They were still mostly taught in basements like his or at the YMCA. So with few business models to go on, he had to experiment to find out what worked.

“Nowadays, kids and families are obviously a priority,” Collins said. “But when I started, I was one of the only kids in the class. Everyone was in their 20s and 30s. So we had to go through a lot of changes on the teaching side.”

One of the biggest things he realized was that the way he’d learned tang soo do wasn’t conducive to the way it needed to be taught in a commercial facility. There were many techniques and forms in the style, but it hadn’t been firmly established when they should be taught to a student or what a student would be required to know to earn a promotion. That prompted Collins to establish a curriculum that divvied up techniques into what each student needed to know for his or her next belt.

He further refined it by taking note of where and why his schools were losing students. Noticing that one of his main problem areas was students quitting after they’d reached green belt, he started examining which elements of the curriculum might be too challenging for green belts to learn and switched those to higher-belt requirements. At the same time, he looked for techniques he could teach green belts that might hold their attention longer.

“One of the big problems was that they were learning a form that was too difficult for them at that level,” he said. “The curriculum had been weighted too heavily on the forms side but was kind of lean on the self-defense side, so we removed the form and added more self-defense techniques plus a weapon.”

Collins continued this approach up all the way through the black-belt ranks, where he said even his Korean instructors didn’t have a real strategy — and that forced him to come up with his own curriculum that would give experienced students a goal to shoot for.

In this way, he figured, his business would continue to grow. “In America, people have to see growth, or they’ll just get bored and quit,” he said.

Perhaps the main thing Collins came to understand was that there weren’t enough incentives to keep students training under the old model, which led to one of his key innovations, what he calls “vision casting.” He looked for ways to inspire his green belts to want to earn a red belt, the next rank in tang soo do, then searched for ways to inspire those red belts to push forward to black belt.

“We made images and posters to motivate students,” he said. “Whenever we held an event, we’d talk about achieving a black belt and what it means. They knew a black belt was something cool to achieve, but we had to define it better. So we said these are the benefits of a black belt: being able to teach, learning new weapons, etc.

“Giving vision and clarity on exactly what students would be achieving by earning a black belt was important. Then if you back that up a bit, you can do the same with achieving a red belt. In our organization’s tournaments, we really highlight the black-belt and red-belt groups now so people will want to become one. You want to inspire people to go to the next level, but you have to give them the vision to do it.”

Collins was onto something. By the early 2000s, he had a dozen schools affiliated with his. Finally, he incorporated PKSA and transformed the organization into an official franchise system. However, he made sure to always have one of his own students or a student of a student at the helm of each facility. PKSA grew to 46 locations, and another four schools are scheduled to open by mid-2020.

Collins’ vision has produced tangible results with respect to keeping students on board for the long haul. Although he said it generally takes four to five years to earn a black belt in a PKSA school, his numbers show that of the nearly 6,000 students the organization currently has, almost 1,000 of them wear the coveted rank.

“We’ll have our corporate events, like training seminars and in-house tournaments, where our students come together as a family from all our locations,” Collins said. “And we’ll do vision casting there that includes discussing the benefits of becoming a school owner. We even include children as part of this to let them know they can continue the legacy, too.”

Although mostly located in Michigan, PKSA now has locations in California, Florida, Mississippi and Pennsylvania. John Prosch, the organization’s vice president of operations, is in charge of maintaining the standards of instruction at each school. That entails traveling every three months to out-of-state locations to keep an eye on quality control, as well as conducting monthly video training for instructors, all of whom are required to undergo regular recertification.

“Though there are a couple of challenges with video training, overall I think it’s better because we’re doing regular checkups with our instructors,” Prosch said. “Video keeps them more connected and motivated. We’re very much involved with all our franchisees and try to keep that consistent level of quality.

“All our instructors have to do this monthly training — hands-on in Michigan and connected via video outside of Michigan — so they’re all doing the same curriculum correctly. If the quality starts to lag, people don’t see the worth there, and it becomes easy to quit. But our goal isn’t to focus on money; it’s to create a positive experience for all our students and to end up with the best black belts we can on the back end.”

In the quest to expand PKSA’s reach, Collins has opted to open overseas franchises. On a recent trip to India, he tested the waters to gauge interest in martial arts in this vast market.

“The greatest thing about India is its population,” Collins said. “There’s huge potential there. They have a lot of interest in martial arts because of movies. And there’s a big interest among girls in learning self-defense because sexual assault is a common problem. Fathers all want their daughters to learn some kind of self-defense because of that. So there’s a great interest in martial arts but still not a lot of opportunity to learn it.”

After speaking with government officials, Collins held several public demonstrations, which drew thousands of spectators. He canvased the crowds for anyone interested in becoming an instructor and school owner and instantly had 40 people sign up. He whittled that list down a bit and has since had a handful of Indian students pass the first phase of training and become authorized to teach white belts. He continues to train his Indian instructors via video and flies there regularly to teach in person. With four schools on the subcontinent now, PKSA has nearly 500 Indian students, and Collins said he’s received inquiries from around the country to open additional facilities.

“Everyone in India wants to own their own business,” he said. “And they love the idea of anything that has to do with America. I was going to change the name of the organization we have over there to Professional Karate Schools of India, but professionals in the country told me not to change it from PKSA. They said people in India are specifically looking for American franchises.”

With India already in the fold, Collins plans on traveling to nearby Nepal soon with an eye on opening franchises there. But the backbone of PKSA’s success remains the children and families that train in America.

“We maintain a very family-driven philosophy,” Prosch said. “As I go around to our different schools, I ask the adults training there what made them start doing this. They usually say they started with their children. They wanted something they could do with their whole family.”

Collins echoed this, noting that many of the organization’s best schools are run by women. “We’re seeing more success from our female instructors. They’re often bringing in more revenue. Most of the time, we’re seeing them come out ahead of our male instructors.

“Our most successful schools are the ones that can create a sense of community so that the people who come into the school will view it as part of their extended family. It makes sense female instructors are so successful because women do tend to be a little more nurturing than men and capable of drawing people into this community.

“But male or female, the success of the school all boils down to the instructor.”