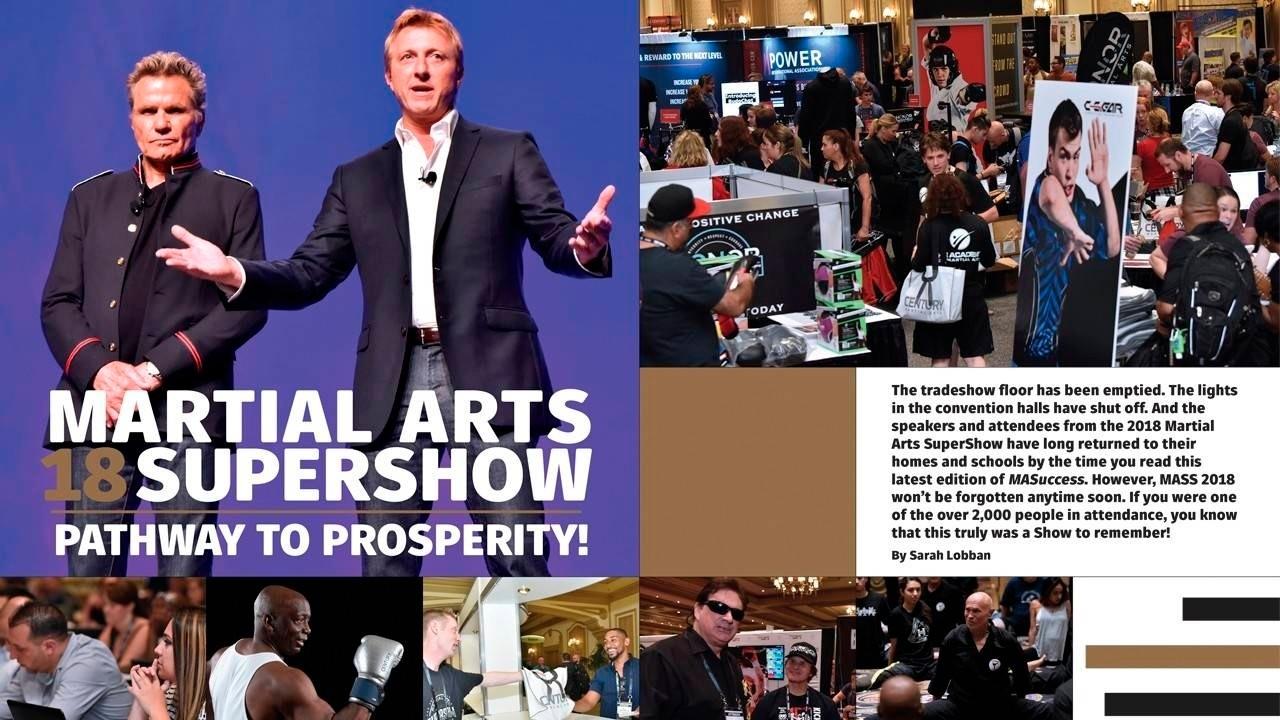 Each year, the Show kicks off with the Opening Ceremonies. In 2018, the ceremony was held the night of Sunday, July 1st. The ceremony opened with a pre-Show to get the crowd pumped up. Mike Chat, XMA founder and former Blue Power Ranger, emceed as giveaway t-shirts and beachballs were launched into the crowd. Three lucky attendees won two-year subscriptions to Black Belt Magazine during a trivia contest, and one randomly selected audience member even won free tickets to the 2019 SuperShow!

Then, the real entertainment began. Members of Mirme Extreme Taekwondo came all the way from Korea to put on a spectacular board-breaking presentation, followed by a spectacular demonstration from Team Paul Mitchell Karate. Finally, Ricardo Guerrero wowed the audience with a traditional kata performance. Then, it was time for MAIA Executive Director Frank Silverman to take the stage.

Silverman’s speech began normally enough. But he was soon interrupted — by none other than actors Billy Zabka and Martin Kove, a.k.a., Johnny and Sensei Kreese from the original Karate Kid movie! They temporarily reprised their villainous roles, to everyone’s amusement, before revealing the real reason for their visit: to help present the Lifetime Achievement Award to world-renowned sensei, Master Fumio Demura. The martial arts legend had helped train both of them for their movie roles, serving as a mentor, and even a father-figure to Zabka.

The Opening Ceremony concluded with a rousing keynote speech. The speaker this year was retired Air Force combat pilot Lt. Colonel Rob “Waldo” Waldman. Waldo, also known as “the Wingman,” inspired attendees to “push it up,” and live their lives to the fullest inside and outside the school.

The next day, attendees woke bright and early for the morning workouts. Over the next two days, they had some difficult choices to make. For example stretching with legendary World Kickboxing Champ Bill “Superfoot” Wallace or sword-based Jungshin? HIIT and Run, high intensity women’s self-defense or Sleek Ninja Training with celebrity-fitness-trainer, Eric the Trainer? All the classes were equally popular, and the rooms were full of excited fitness buffs.!

If choosing a workout was difficult, it was nothing compared to the decision-making that took place during the daytime seminars. Century and MAIA always work hard to make the Show go smoothly, but there’s one problem they want attendees to have: access to so many good seminars that it’s hard to choose just one!

Many schools send multiple people to the Show for just that reason. Really, how can you pick between master-of-the-classroom Dave Kovar teaching you how to develop your staff and learning marketing from SuperShow success-story and MAIA consultant Shane Tassoul? Or discovering new ways to grow your business with Premier Martial Arts founder Barry Van Over versus picking up new grappling tips from BJJ World Champions Ricardo Liborio and Bruno Malfacine?

Every year, the SuperShow features returning speakers: individuals who are so popular, or whose subjects are so critical, that they draw crowds again and again. However, MAIA also makes sure to bring in new speakers. The mix of established voices and learned fresh faces is one of the Show’s biggest draws, as well as one of the best indicators of the event’s quality.

Among the new speakers this year were US Olympic Karate Team hopeful, Tom Scott, multi-school owner, Robyn DePalma, high-level instructors Abid Benwali and Eric Santamaria, and many others.

When attendees weren’t in seminars, they perused the tradeshow floor, scoping out the latest innovations. There were also ample opportunities to meet and chat one-on-one with well-known martial artists, like the aforementioned “Superfoot” Wallace, BJJ’s Ricardo Liborio ,Mike Chat, Benny “the Jet” Urquidez, Justin Wren, Dana Abbott, and many others.

UFC fighters Michelle Waterson and Daniel Cormier (who won his heavyweight title fight just a few days after the Show!) made appearances at the Zebra Mats booth. Comedian Master Ken (actor and black belt Matt Page), star of the hit web series Enter the Dojo Show, even made a surprise appearance and posed for pictures with his many fans! Billy Blanks, founder of the hit martial arts-fitness phenomenon Tae Bo, debuted his new program, Billy’s Boom Boxing Workout and attendees got to be some of the first to try it!

One of the biggest features on the tradeshow floor this year was the Century booth, although it looked a little different. Usually, Century showcases new products. However, in 2018 it was all about custom services, including new sublimation printing. In fact, a small sublimation printer, manned by Century artists, was set up at the Show for on-the-spot custom orders!

The final day of the Show rolled around with mixed feelings. The camaraderie that martial artists, instructors and school owners get to feel at the Show is one-of-a-kind. That, coupled with the fun of Vegas, makes everyone a little sad to leave. On the other hand, everyone is ready to rush back home and implement what they learned at the Show within their own schools — and watch the magic work there!