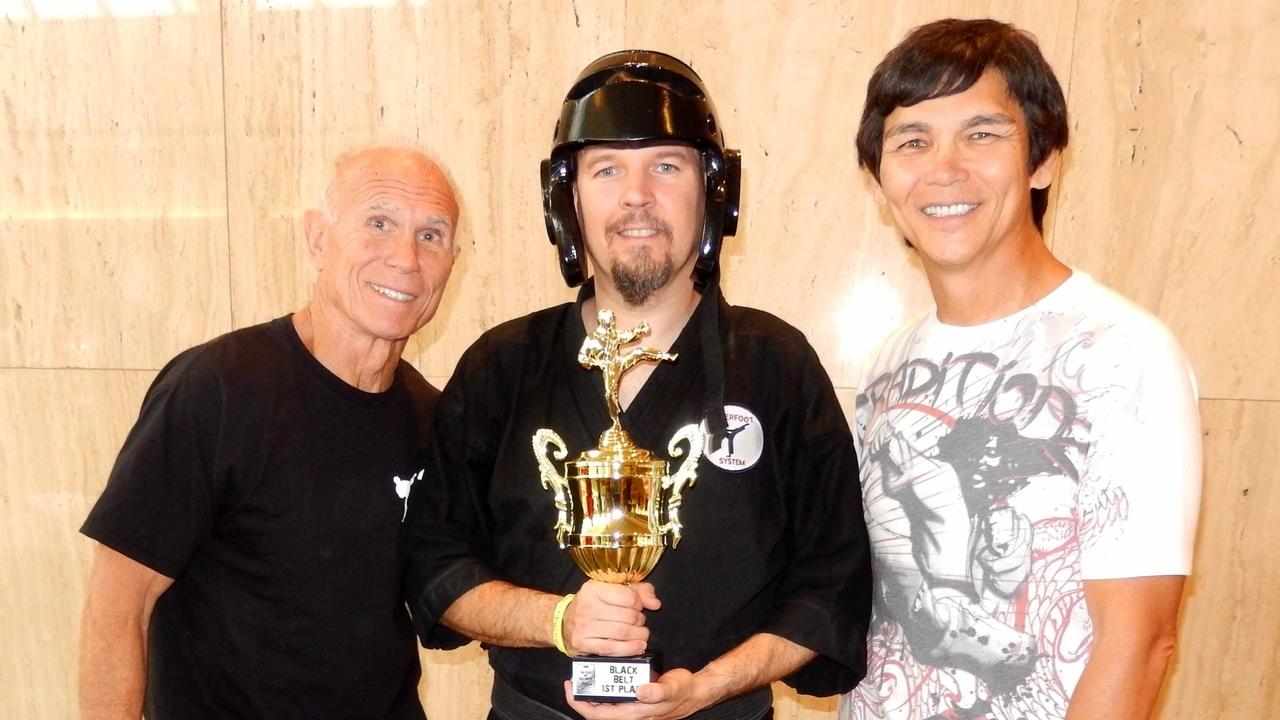 Never one to give up, Ed started again a few years later and began working with a program called “Kidsafe” that was being run out of an elementary school in Lawrenceville, NJ. He held weekly classes and drew a respectable number of students.  Ed's mother and sister helped out and kept the books for the school.

I met Ed in 1998 and was soon assisting him in classes and handling the weekly paperwork. We married in 2000, and Ed decided that it was once again time to run his own school. We revived E.Y. Martial Arts and held classes at a firehouse, in a shared space in the building’s ballroom. Every week, we would set up floor mats for three days of classes and then pull them up and put them all away again until the following week. This process was week after week for several years. We didn't mind. It was a labor of love.

When we started out, the classes were small. There were five students in Ed's first group of black belt candidates, but the classes and attendance numbers continued to grow, as did our family. We had two of our four boys during that time.

After sharing space for three years in the firehouse, Ed made the move to open a dojo in nearby Hamilton. The 2,000 square foot space was enough to bring his dream back to life. After a few coats of paint and minor changes to the layout, E.Y. Martial Arts was once again ready for business – and this time it was in Ed's own space.

The location was perfect. Hamilton was a burgeoning municipality with many children attending 17 elementary schools, three middle schools and three high schools. The plaza where E.Y. was located was easily accessible from a number of highways and it was visible from the road.

During that time, Ed and Bill “Superfoot” Wallace became friends. Not long after they met, Bill came up from Florida to hold the first of what became many seminars that attracted most of Ed's students as well as some local fighters eager to train with Superfoot.

Ed and Bill had many similarities, including their personalities, their senses of humor, and their unbridled love for martial arts. One of Ed's biggest joys was calling Bill on the phone and telling his students about it. They were in awe of the friendship between their Sensei and Superfoot and loved that Ed could make a phone call and get Superfoot on the line. 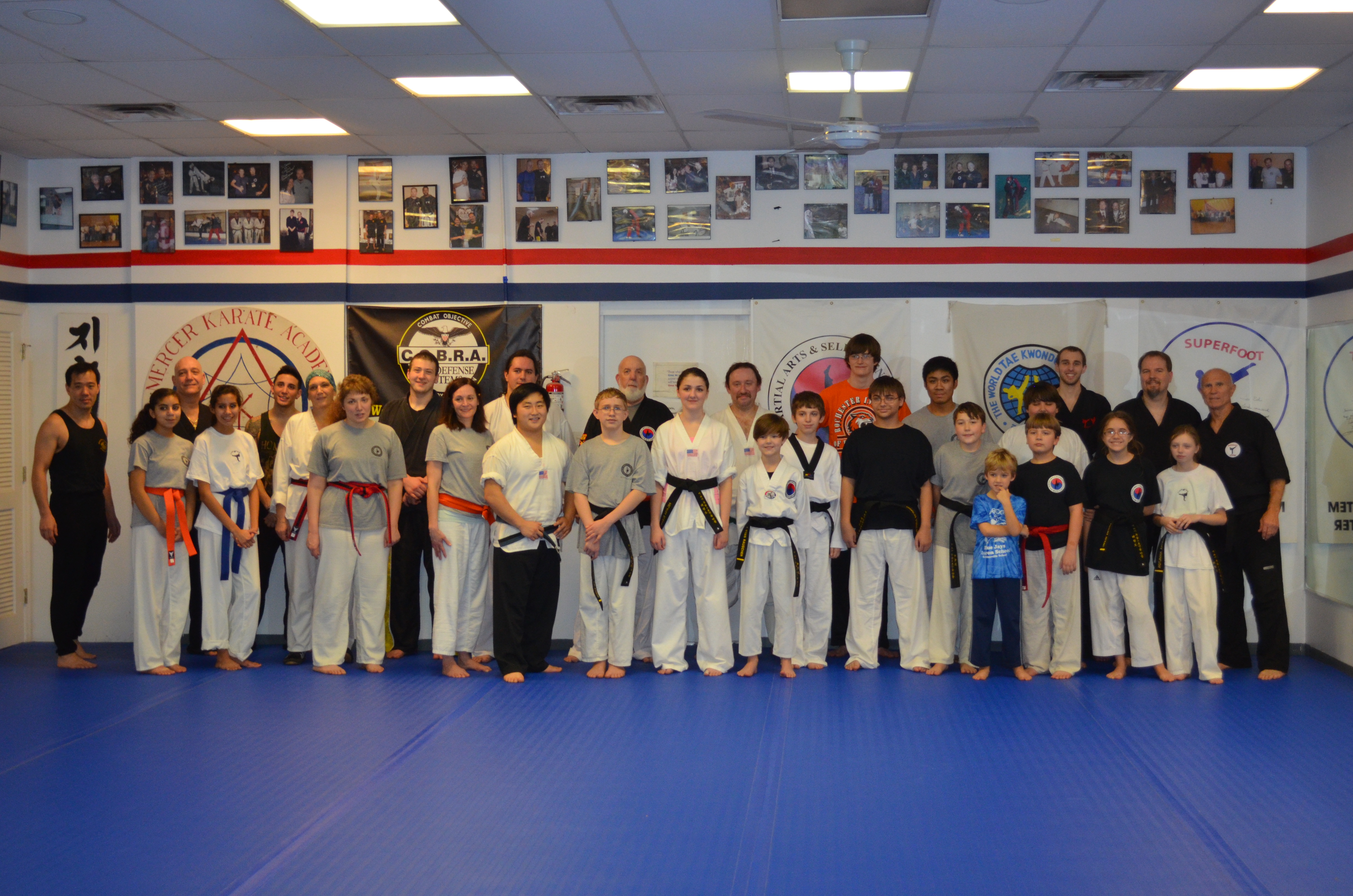 A full class at E.Y. Martial Arts. Bill Wallace, back row far right, stands next to Ed, second from right.

Ed was never satisfied with being average, neither in how he ran his school nor in life. He made a point to teach his students more than just the martial arts and share with them some of the life lessons that he had learned.  His classes frequently involved discussions about issues his students could relate to – stranger danger, bullying and how to avoid fights at school – and techniques for handling them. He wanted his students to feel confident and safe and he thought it was important that his classes focus on real-world situations.

Ed was a teenager when he was introduced to Golden Eagle Karate. It was there that he found his passion:  taekwondo. After a lot of hard work, he earned his black belt and started teaching classes. He would often tell everyone that the martial arts saved his life. It gave him purpose, kept him in shape, provided inspiration and showed him a new way of life. 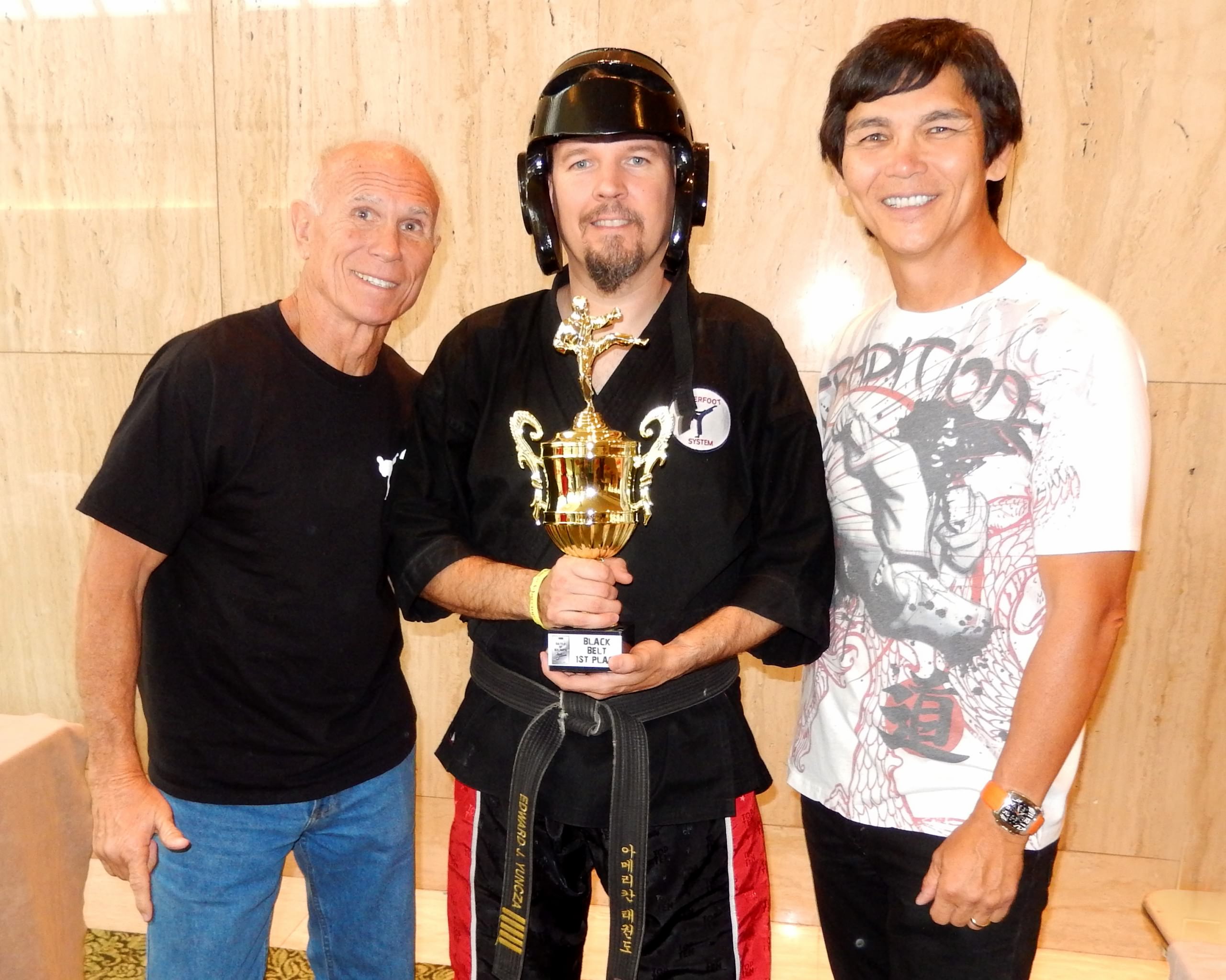 He loved to participate in tournaments as well. When he and I first began dating in 1998, he won the Grand Championship in the Jersey Shore Karate Invitational.  A full-time job, his school and his growing family kept him out of the tournament scene for about 12 years. Then, the tournament bug bit again and he began training in earnest. In 2014, with Bill Wallace and Don “The Dragon” Wilson by his side, he won the Grand Championship for his division in the Battle of Atlanta.

Ed moved the school one more time, but not very far. The space was just around the corner from his current location. He always had his eye on it and now it was finally available. It was about 500 square feet larger than the previous school and he had big dreams about what it would become.

Ed has been writing freelance martial arts articles for publications such as Black Belt magazine and Inside Kung Fu magazines since 1995. Below are some of his most popular articles: 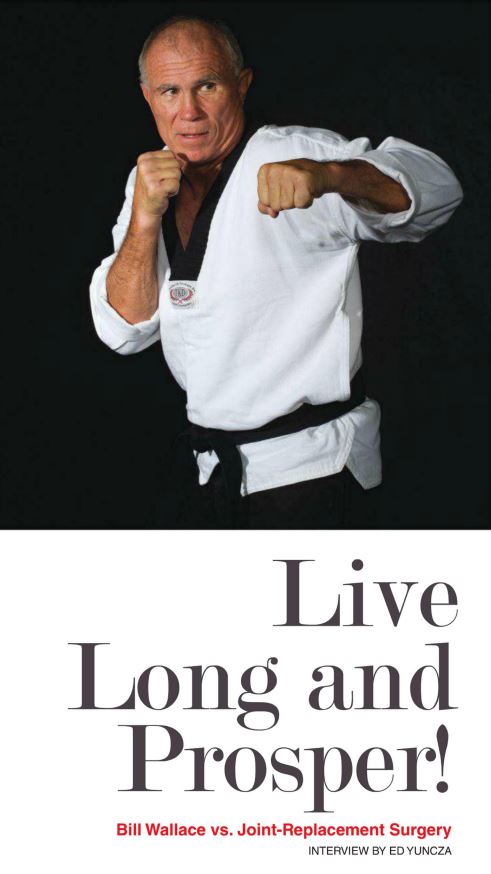 In 2011, Ed wrote and published his first full-length book called “Sport Karate Point Sparring: An Essential Guide To The Point Fighting Method” with a forward from Bill “Superfoot” Wallace.

Ed always said that his greatest accomplishment was his family. He brought his four sons in to karate early on and showed them what he loved so much about it. Today, three of them are black belts and the youngest is on track to achieve his in about a year.

There was so much going on in our lives and Ed was always planning his next idea to grow the business. Things were humming along with our family and with the school and then life, in its unpredictable way, threw Ed the biggest curve ball you could imagine.

He began feeling ill in January 2017 with back discomfort and general malaise. Doctors initially thought he had a soft tissue lipoma, something benign and treatable. But Ed continued to feel worse as the days passed. Further testing revealed a diagnosis of soft tissue sarcoma, an uncommon and aggressive cancer.  March 14th was the last day Ed would ever teach karate. For the next six weeks, he underwent multiple chemotherapy treatments, hospital stays due to complications and finally a week at home breathing with the help of an oxygenator.

On May 2, Ed 's bright shining light had dimmed for the last time and he passed away.

His death hit his family, his students and his friends hard. At 46 years old, Sensei Ed had done more than even he ever thought would be possible.

Which brings me back to the question:  When you lose the heart and soul of your school, what do you do?

I’ll tell you what I did. As I said earlier, first I mourned.  Mourning is not finite – it continues every day, including this day.  But life has to go on. Our boys still need to go to school, participate in their activities, meet their friends, do their homework. I have the family to care for, bills to pay, a home to maintain, and, yes, a karate school to run.  So I had to take the time to ask the big questions, especially where the school was concerned: Will students come back to E.Y. Martial Arts? Will instructors come back? Can the school sustain itself and, importantly, grow?

Ed was a very smart man. During his years of karate, he found a select few students that he built up and taught how to lead, how to instruct and how to continue when he was not there. Sensei Mike Ryfinski was 10 when he started at “Kidsafe.” Now, at 28 years old, he is the head instructor of the school. Sensei Gaby Gonzales was just 5 years old when she came to train. Now at 23 years old, she is the assistant instructor.

It took a little bit of adjusting and a lot of self-confidence for both of them to pick up the pieces and continue on with Ed's legacy. The parents of our students have seen the intensity, knowledge and love of the martial arts that these instructors continually bring to E.Y. Martial Arts. Our sons and the “Leadership Academy” students also help with classes and keep them fun and exciting I have taken over the business end of things and make sure the lights stay on. 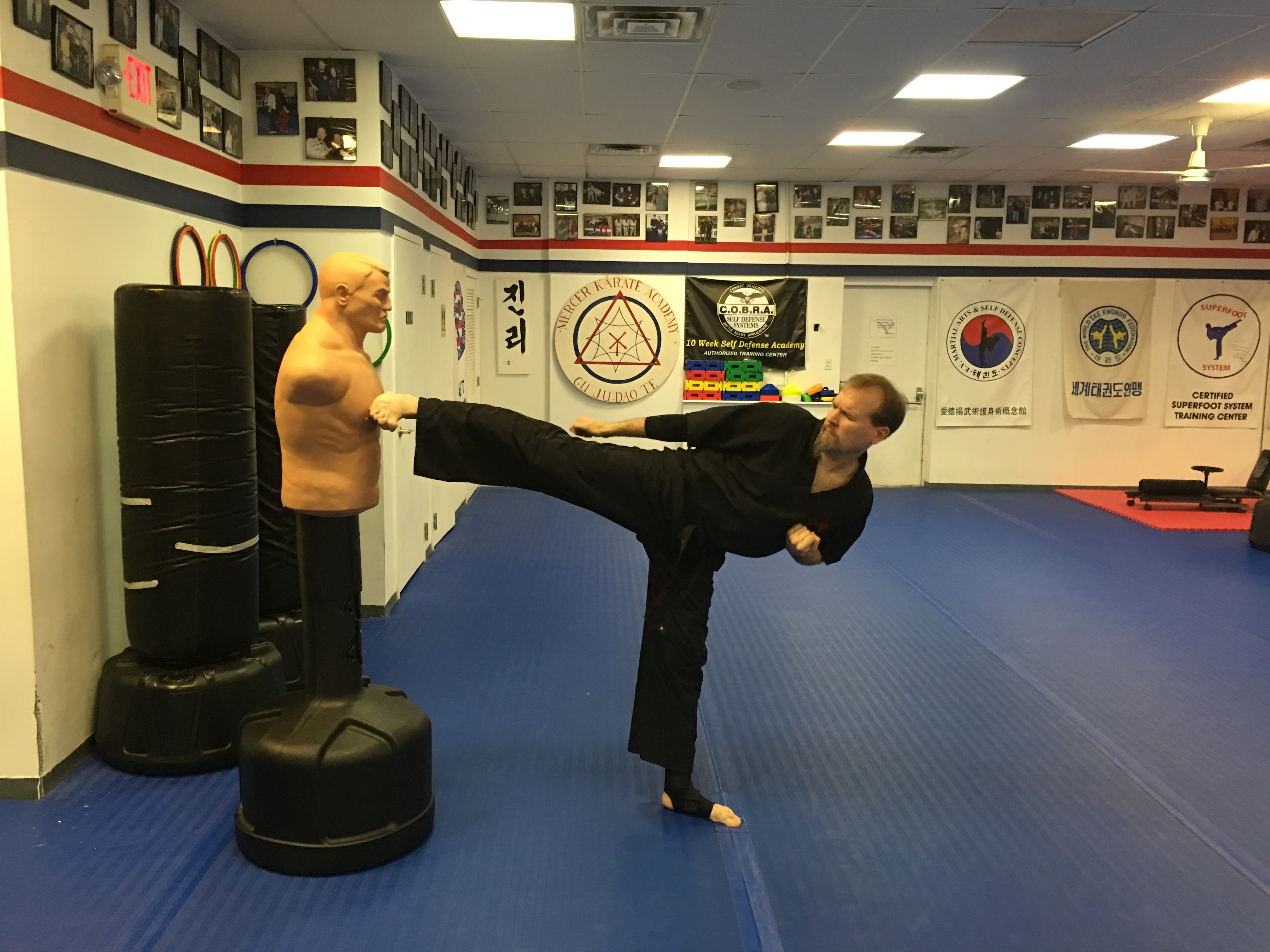 Two years after Ed's passing, E.Y Martial Arts is still open and going strong. It is not the same without him here; it never will be. However, his humor, his unique way of teaching and his passion for the martial arts are present in these instructors and within the very walls of this dojo. Ed's indomitable spirit lives on.