John Corcoran: The Pen is Still Mightier than the Sword 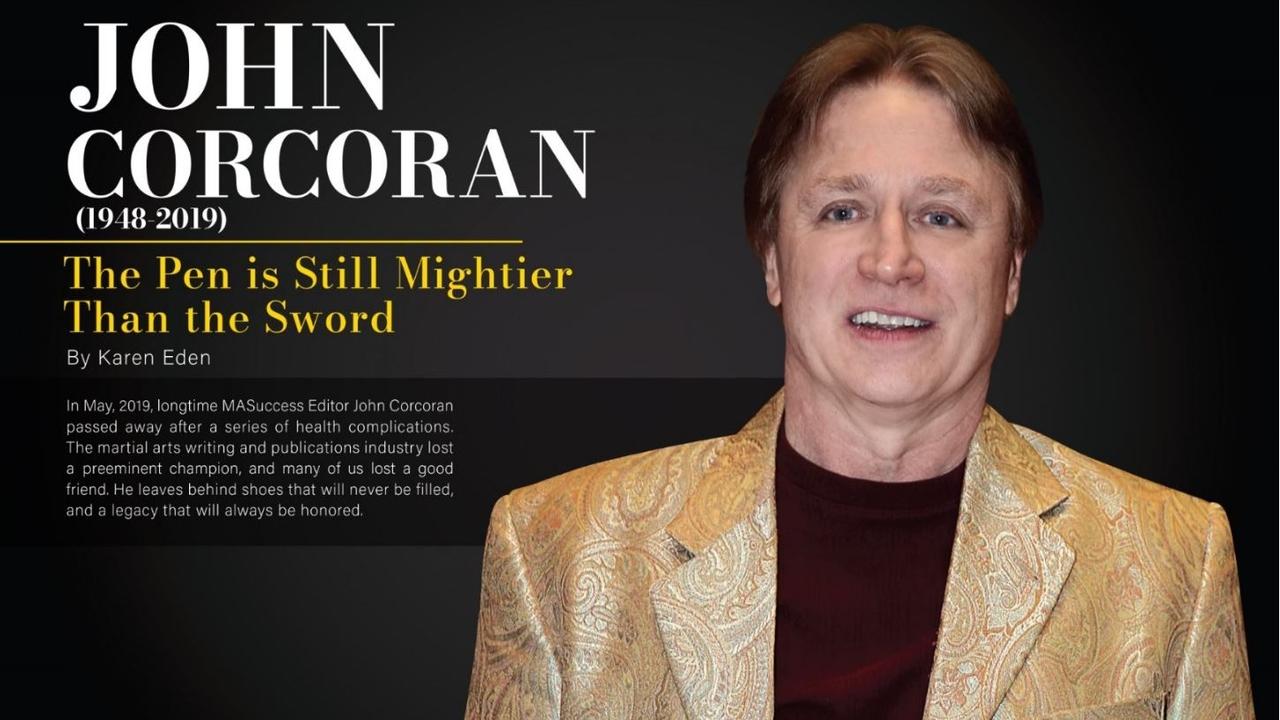 In May, 2019, longtime MASuccess Editor John Corcoran passed away after a series of health complications. The martial arts writing and publications industry lost a preeminent champion, and many of us lost a good friend. He leaves behind shoes that will never be filled, and a legacy that will always be honored.

“Writing is a talent. You can either write, or you can’t.”

To the best of my knowledge, John Corcoran only went public about his life one time. It was in a two-part write-up in the now defunct “Inside Tae Kwon Do” magazine from 1995 (CFW Enterprises, “The Pen is Mightier than the Sword,” Oct/Nov 1995, by Andre Alex Lima).

The biographical story “The Pen is Mightier than the Sword” happened to be in the same magazine that I was writing my very first martial arts column for, so I still have both magazines that contain the two-part story. But I never took the time to thoroughly read them until now. It was as if my good friend and mentor, who we called “Cork,” was speaking directly to me from a magazine that is now 24 years old.

He spoke of why he wanted to do his write-up: “I could die tomorrow, and would have missed the chance to tell my story,” the article read. His last paragraph would disseminate his life’s intent – intent that I am honored to reiterate on his behalf today.

In the Beginning, There was Chaos

John Michael Corcoran, Jr., was born in Pittsburgh, during a time when steel mills were in full swing. The air was filled with smoke and the towns were filled with hard-working, hard-living people.

“The Irish-Catholic Corcoran family elevated ‘hell-raising’ to a science,” he wrote.

I knew exactly what he was talking about. I was working for a radio station that was one floor up from where John used to work as a delivery boy for the Lincoln Pharmacy in Millvale, Pennsylvania, a little town right outside of Pittsburgh, not too far from the Heinz Ketchup plant.

We wouldn’t discover this until years later, but I can attest to the fact that practically every other building in that little town was and probably still is a drinking establishment.

It was rare that my friend Cork ever spoke of his childhood. But I knew it wasn’t a happy one. On several sentimental moments over the years, he would tell me how much he could relate to my writings, and how much my inspirational words reminded him of his own past. I knew when Corky gave a compliment he meant it, and I was honored.

As a teenager, John sought out the discipline and focus of martial arts training. He credited a dysfunctional upbringing for driving him on this search. As so many of us do, he fell in love with the arts. Five years later, he would earn his black belt in Okinawan Shorin-ryu, from Instructor Glen Premru of Pittsburgh.

The Risk and the Payoff

Remember the job at the Lincoln Pharmacy I referenced? As a young man, John saved up enough money to buy a one-way ticket to L.A, and let’s just say that he went on his last delivery job. John was going to take the risk of becoming a screenwriter and martial arts magazine contributor in Hollywood. He left the pharmacy car parked at the Greater Pittsburgh Airport, then made one last trip to the phone booth to let them know where they could find it. Very few people could leave me with a loss for words, but Cork was one of them. I always did a double-take when he told me these stories.

In Los Angeles, Cork started to get writing gigs. His first published piece was for Official Karate Magazine in 1972. I can only guess that the “luck of the Irish” was on his side. Months later, a relatively new magazine called Black Belt would take notice of his work. They offered John Corcoran the editor’s position. He was a writer with an actual black belt, and it would become a historical partnership – one that would set John as the founding father of martial arts journalism.

Gut Instinct and Writing from the Heart

Over the next couple of decades, John became instrumental in promoting and consulting within the martial arts industry. He helped to forge greatness in major karate organizations and magazines, many that are still up and running strong today. He helped put Karate Illustrated and Black Belt Magazine on the map.

He also consulted with Joe Corley and the Professional Karate Association (PKA) in setting up rules and guidelines that are still being used nationally and around the world today. Joe, along with Bill Wallace and Jeff Smith, would later honor him with the Joe Lewis Eternal Warrior Award at the Battle of Atlanta for his contributions.

Corky had a “gut feeling” about Jean-Claude Van Damme and T. J Roberts. He touted them in the media as “the next rising stars,” and he was right. He made media sensations out of champion fighters Bill “Superfoot” Wallace and Joe Lewis.

He also took the next generation of writers under his wing and helped them get established – writers like Keith Yates, Andre Lima and myself. As a matter of fact, if you were a martial arts writer of any kind, John probably had something to do with it. Other martial arts notables that I’m sure could thank Cork today include Howard Jackson, Karyn Turner, Ernie Reyes Jr., Troy Dorsey, Earnest Hart and Don “The Dragon” Wilson. Ask any of them (us) and you’ll hear that John Corcoran had a great role in promoting personal martial arts success stories.

Roommate with the Greats

By a strange twist of fate, John Corcoran would become roommates with both world champion fighters Joe Lewis and Bill Wallace, who was filming “Force of One” with Chuck Norris at the time. It was the late 70’s in Los Angeles. This is when Cork says Joe Lewis became his martial arts mentor and best friend.

“Joe could take the moves you spent hours training on at a traditional karate school and turn them into practical skills,” John iterates in his biography. He also wrote that death of Joe Lewis in 2012 sent him spiraling downward with grief for months.

But if you could catch John at the right time, the stories about his “L.A roommate” days would keep you entertained for hours. Bill Wallace said it was a blast having the three of them together in one apartment…we can only imagine!

It was also around this time that Cork would become an established screenwriter. His main claim to fame would be “American Samurai” starring Mark Dacascos. John also had minor roles in action films and stunt work. But he always maintained that he was a writer first, and he was here to put martial arts on the literary map.

Working with the Next Generation

“Write from the heart; don’t do what everybody else is doing,” Cork would tell me.

For myself, in 1997 I was offered the book deal of a lifetime. It was to write the Tae Kwon Do book in the extremely popular “Complete Idiot’s Guide” book series (Simon & Schuster, MacMillan books).

“It’s not my kind of writing, Karen, and you need to do it,” Cork told me.

I was in the middle of grieving the tragic death of my father, working seven days a week at the most stressful major market TV job of my life, and my marriage had just ended.

“I can’t do it, Cork,” I said as we sat at a local restaurant just outside of Pittsburgh.

He paused, then silently pushed the book format back toward me on the table.

“Not only can you do it, Karen, but you will do it, because it will set up you as a respected writer in the industry.”

He was my writing mentor and I trusted him. So for the next three months, I would get off work at the local FOX news affiliate late at night, go home and spend the next three hours of the early morning writing “The Complete Idiot’s Guide to Tae Kwon Do.”

As usual, Cork was right. It was my ride up, gaining the attention of book agents and setting my royalty fees for many years to come.

I don’t know why John Corcoran believed in me. But like many, he evidently saw something in me that I couldn’t see in myself at the time. This is a direct quote from his biographical write-up:

“I am revealing my formula for success at this time because I don’t think I have that many books of any magnitude left to write, and I want to pass the torch to the next generation. I have worked very hard to take martial arts literature into the big-time arena, and I hope some young ambitious martial arts writer out there who’s reading this will someday take the genre farther than I have.”

After 12 books and 24 magazine editorial positions, I can only say that Corky, you’re leaving us with some big shoes to fill!

In the End, Writers are Immortal

Cork was in the middle of editing MASuccess magazine when he left us. I remember in 2001 when he was hired by Century Martial Arts to be the managing editor.

“This is a revolutionary magazine, Karen,” he told me with great enthusiasm. “It’s a high-quality magazine that is going to reach millions of schools owners like never before.”

The last words I heard from Cork were the same words I’d been hearing for the last 26 years: “Got your column, Karen,” he wrote. But this time he’d added another line: “Love you.”

John had been recovering from triple-bypass surgery a few months earlier, but had never quite seemed to recover. Within a couple of days, he would pass peacefully with his wife Leslie by his side. He was 70 years old.

John’s final words in his personal write-up from 1995 seem to resonate more today than they even did back then: “Whomever it is (in the next generation of writers) must understand, you can’t be motivated by money alone. The big reward is what every person seeks in his lifetime, immortality. My books will live on long after I’m gone.”

Rest in peace, our longtime friend and comrade. We have your books, and your pen indeed is still mightier than the sword.