Igniting a New Style of Fighting! 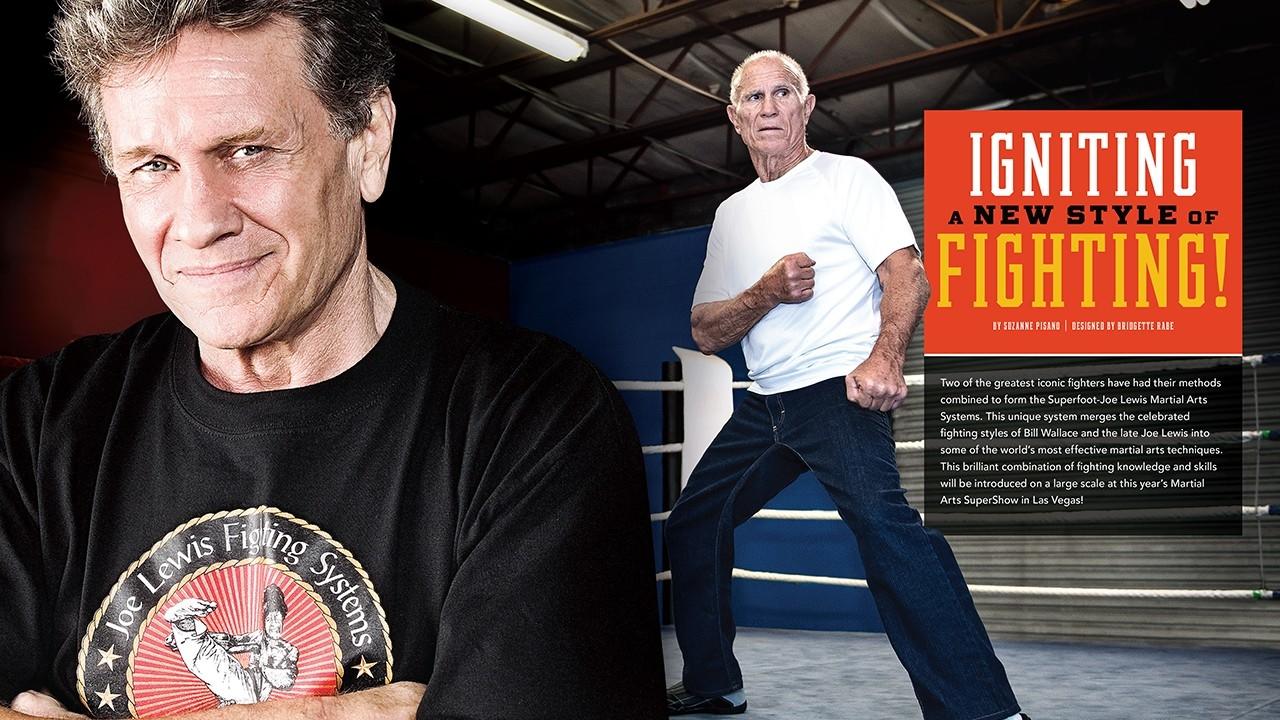 Two of the greatest iconic fighters have had their methods combined to form the Superfoot-Joe Lewis Martial Arts Systems. This unique system merges the celebrated fighting styles of Bill Wallace and the late Joe Lewis into some of the world’s most effective martial arts techniques. This brilliant combination of fighting knowledge and skills will be introduced on a large scale at this year’s Martial Arts SuperShow in Las Vegas!

Learning from the Legends

Bill Wallace and Joe Lewis met in 1968, when both were competing at the World Professional Karate Championships in Kansas City, Missouri. Lewis noted that he and Wallace had a similar stance. It turned out that, while serving in the military in Okinawa, Wallace in the Air Force and Lewis in the Marines, both had studied shorin-ryu karate with the same sensei — Master Eizo Shimabukuro.

So began a close and loyal friendship that lasted until Lewis' death in 2012 at the age of 68. The pair would become superstars and, ultimately, living legends at both tournament point-fighting and professional full-contact kickboxing.

Over the years, the two champions also became like brothers, traveling the world, competing, teaching and conducting seminars. Perhaps it's only fitting that almost 50 years to the day since they met, the bond endures in the form of the Superfoot-Joe Lewis Martial Arts Systems, an exciting new venture that launched last year at the 2018 Martial Arts SuperShow in Las Vegas.

Though Joe Lewis was 30 pounds heavier, both he and Wallace were equal in professional stature. Each man was a legend, and each was respected for their accomplishments in a sport mastered by a select few.

As a heavyweight champion, Joe Lewis's strength was, in fact, his strength. His muscular physique and upper-body power were renowned, along with his relentlessly competitive nature.

In the late 1960s, Lewis was becoming increasingly frustrated with the scoring in point karate, where the blows were supposed to be pulled short of contact, and the damage merely hypothetical. He wanted to push the boundaries and grow the sport from the traditional, hand-me-down methods to techniques that could be developed and refined.

He wanted to prove that martial artists could use these techniques to fight to a knockout in the ring, just like in boxing.

Since 1968, he had been trying to organize a full-contact karate bout, and finally did so on January 17, 1970, as the main event at the first U.S. Pro Team Championship in Los Angeles. He knocked out opponent Greg Baines in the second round.

From that point on, the sport grew slowly, leading to the first World Professional Full Contact Championships on September 14, 1974.

Lewis won the heavyweight division and Wallace took the middleweight crown. Together, they became the founding fathers of the new American full-contact sport.

In contrast to Lewis' punching prowess, Wallace is known for his devastating kicks and blinding speed.

Unable to kick with his right leg due to an early judo-training injury, he developed otherworldly skills with his left leg. He even perfected it as a jab, popping an opponent’s face with it two or more times without replacing it on the ground.

Furthermore, his lightning-fast left-leg round kick was once measured at an incredible 60 miles per hour delivery speed! That was when he became known as “Superfoot.”

From his first championship in 1974 to his retirement in 1980, Bill Wallace remains the only undefeated full-contact karate fighter in the sport's history.

The Importance of Mental Discipline

Physical skills are one thing, but then there's the mental discipline. How do you approach each match when you're undefeated? Did you ever go in thinking you might lose to an opponent, or wondering how much longer the streak could continue? If you're Bill “Superfoot” Wallace, the answer is definitely no.

“Every one of them had the ability to knock me out, so I still had to train, still had to be ready and able to go the distance,” he says. “I approached each match like it was my toughest. My attitude was always, 'To beat me, you're going to have to kill me.'"

Still, the competition was, he says, "An absolute blast. You can see in pictures and video that I'm smiling. I'm a competitor, and I enjoyed the competition."

That combination of focus, commitment and attitude made Wallace highly sought after as a teacher and mentor following his retirement in 1980. Lewis was equally in demand. In fact, they were on the road for decades conducting seminars and symposiums, passing on their knowledge, skills and mental toughness to new generations of athletes who were daring enough to want to learn from the best.

"People — black belts and school owners — would call us,” says Wallace. “They'd say, ‘We'd like for you and Joe to do a seminar for us.’ And we'd pack our bags and go."

Their competitive teasing of each other, entertaining banter and complementary skill sets made them very appealing as a seminar teaching team.

"Joe was very strong, very intelligent,” Wallace says. “He was the puncher, and I was the kicker. I don't try to be strong, I try to be fast."

A Dynamic Blend of Styles

These skills serve as the foundation of the Superfoot-Joe Lewis Martial Arts Systems (S/JLMAS) program. The unique plan has merged the Superfoot and Joe Lewis styles and mixes in the best of the world's martial arts techniques. It includes kicking from karate and taekwondo, punching forms from boxing, exercises to improve strength and flexibility, and workouts to develop greater speed, endurance and mobility.

In addition to the physical training, the system incorporates leadership and mentoring, creating an ongoing learning environment designed to produce the next generation of champions.

Memberships will be available to both martial arts schools and individuals, including school owners, instructors and program directors. Individual memberships will include training at an authorized S/JLMAS school and the opportunity to attend an annual national conference with Bill Wallace, where members will enjoy an exchange of ideas, training methods, sparring and self-defense, plus the camaraderie and kinship that only those who have trained together and faced one another on the mat can appreciate.

But wait, there's more! There are members-only videos and content, online training, and the honor of being registered as an authentic S/JL fighter with a certificate signed by the legendary “Superfoot” himself.

Of all the fighters that Wallace has watched or faced, who has impressed him the most? At the top of the list is, of course, Joe Lewis, he admits.

"He was an excellent boxer; 210 pounds, but so light on his feet," Wallace says with admiration. "He believed that mobility was a key factor in sparring that had gotten lost along the way, and he wanted to bring it back."

Fifty years after the two first met, Wallace says, "It's easy to make friends in this business. It's hard to keep them."

Competition, egos and rivalries take their toll. But the lifelong friendship between Bill Wallace and the late, great Joe Lewis lives on in the memories the two shared. And now, too, in the blending of styles and forms that comprise the Superfoot/Joe Lewis Martial Arts Systems.

For more information and to join as an individual or school, visit