Fighting for the Forgotten 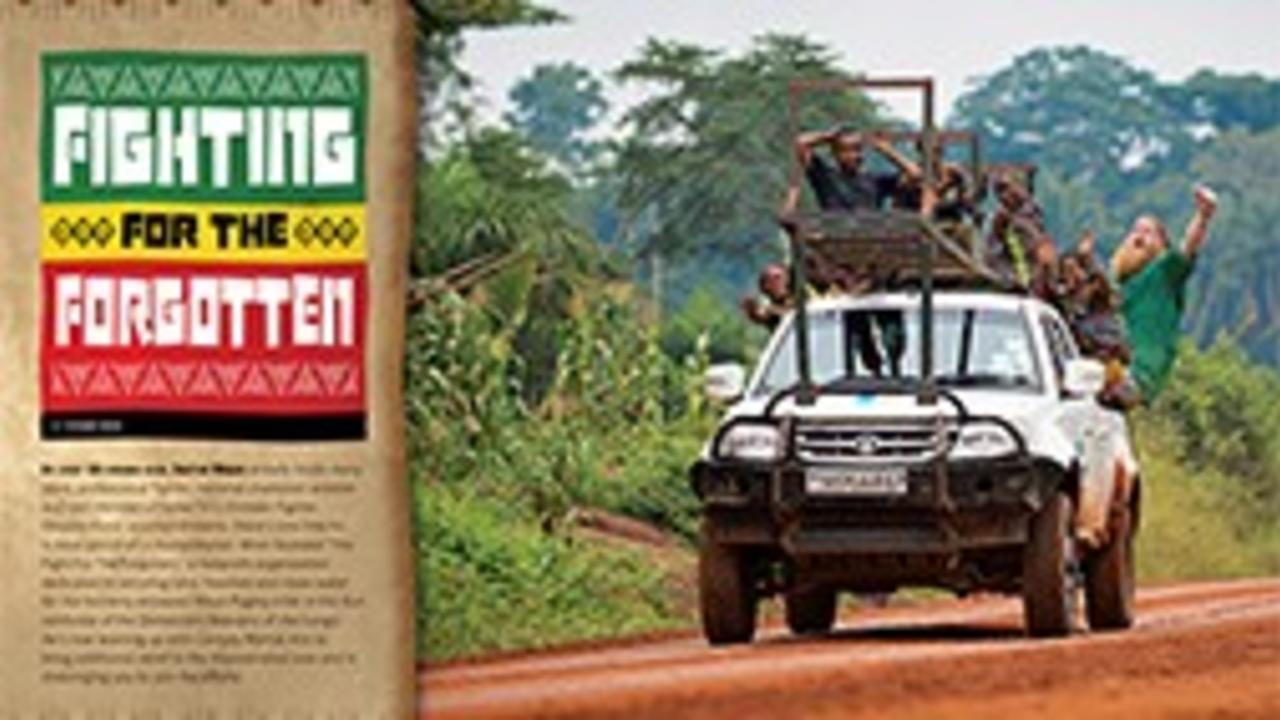 At just 30-years-old, Justin Wren already holds many titles: professional fighter, national-champion wrestler and cast member of Spike TV’s Ultimate Fighter. Despite those accomplishments, there’s one title he is most proud of — humanitarian. Wren founded “The Fight For The Forgotten,” a nonprofit organization dedicated to securing land, freedom and clean water for the formerly-enslaved Mbuti Pygmy tribe in the Ituri rainforest of the Democratic Republic of the Congo. He’s now teaming up with Century Martial Arts to bring additional relief to the impoverished area and is challenging you to join the efforts.

Before Justin Wren was the professional fighter we know him as today, he was a young child who fell victim to constant bullying. The bullying got so bad he had to change schools several times. It was at the age of 13 when he came across something that changed his life forever.

“I stopped at a used VHS tape store and found UFC 2 through like UFC 11. I used all of my allowance on that. I looked at the front and was just memorized by the guys. I looked at it and thought, ‘Wow! These guys don’t get bullied.’”

It was with that videotape series Wren  found his love for tough, physical and sometimes brutal athletics. In high school, he decided to give wrestling a try.

Wren went on to become a state champion wrestler, went to the U.S. Olympic Education Center at Northern Michigan University, then went on to compete at the Division I collegiate level for the Iowa State University Cyclones.

It was there, while wrestling for the Cyclones, that Wren sustained an injury that inadvertently led him down a new career path. While rehabilitating his injury off the mat, he turned to mixed martial arts (MMA). What started out as just a workout to stay in shape, quickly turned into much more as Wren discovered his natural talent for the sport. The combination of Wren’s wrestling background with his newly formed MMA skillset was just the ticket to land him a spot as a cast member for Season 10 of Spike TV’s The Ultimate Fighter.

The sudden rush of fame and success came at a cost for Wren. It would lead him into a fight he never expected. While winning on the mat and in the cage, Wren faced a different opponent in his everyday life: depression and addiction.

After years battling his demons, Wren stepped away from MMA to find his faith in God and his purpose in life.

Wren started volunteering at the local children’s hospital, his church youth group, and at other rehab facilities. His love for helping others became his passion. That passion took him on a mission where he found his true calling — in a place he never expected.

Wren’s life journey would eventually end up in one of the most unexpected of places, a remote area in the Congo face-to-face with the Mbuti Pygmy tribe.

The Pygmy people have been called the most oppressed humans on Earth. They refer to themselves as “The Forgotten People.” The Pygmies face an ongoing crisis due to discrimination and even enslavement from other tribes. Wren felt an immediate connection with them.

Wren lived with the Pygmies and saw the deplorable conditions they deal with daily. He watched as women and young children walked miles for clean water, making multiple trips per day. He witnessed tribe members forced to use feces contaminated water for every day purposes. He saw firsthand the consequences of such practices including illness and death, when people don’t have access to clean water.

To help his Pygmy family, Wren founded “The Fight For The Forgotten.” He partnered with Oklahoma City-based nonprofit Water4.org. Together, they set out to eliminate the water crisis.

Today, Justin Wren and Water4 are taking on a new challenge. They are collaborating with Century Martial Arts of Oklahoma City in Century’s Fight 4 Water campaign. The campaign sets out to bring aid to the Pygmy people. Century made an initial pledge of $20,000, which will build wells in five communities throughout the Congo. The long-term goal of the partnership is to raise $420,000, but they need your help. Water4 and Century are calling on the martial arts community to assist in the relief efforts.

“We’re hoping to rally at least 100 martial arts academies or individual martial artists that want to transform an entire community. One-hundred academies transforming 100 communities. That’s going to be tens of thousands of lives bettered. It would be an absolute game changer,” Wren adds.

Wren is quick to point out that even the smallest amount goes a long way to helping the Pygmy people. He encourages every school owner to step up and help.

“I truly believe the martial arts community is about bettering yourself and bettering the lives of others — and about community service. It’s about making our lives and other’s lives better. I don’t think there’s any more practical way than us standing up and saying we’re going to fight for people and we’re going to knock out the water crisis in this century. “