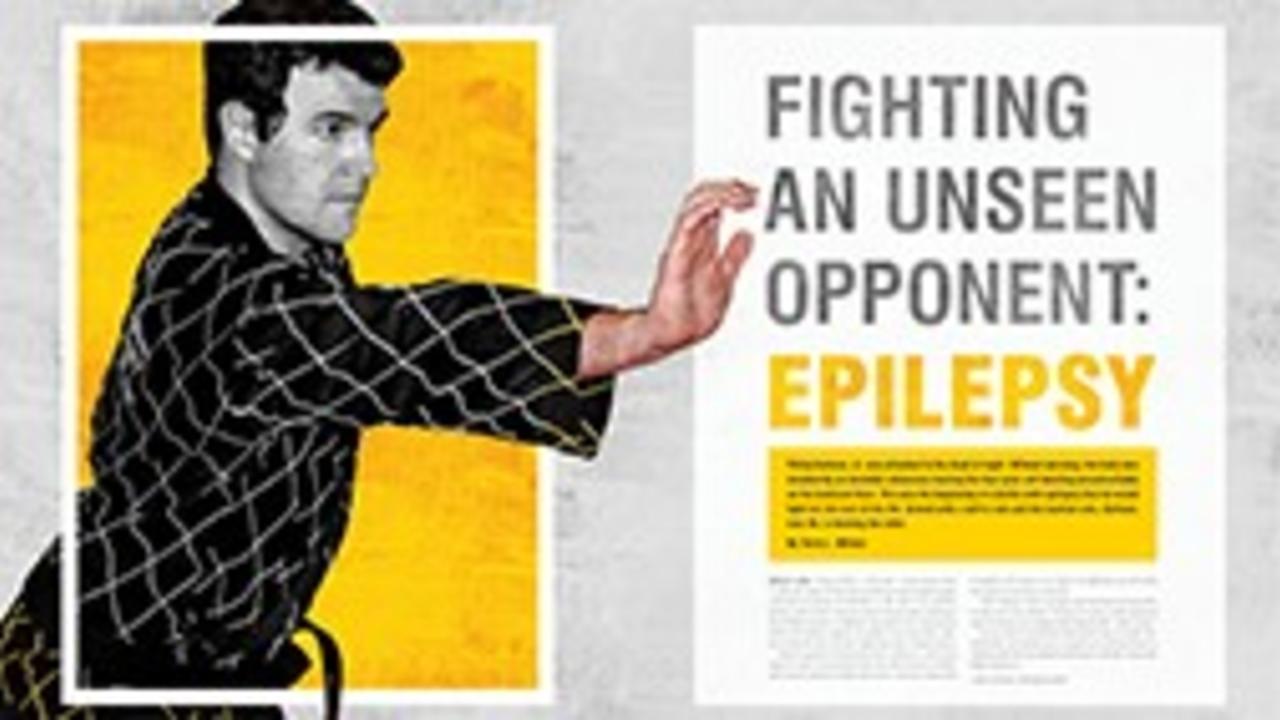 Philip Gattone, Jr. was attacked in the dead of night. Without warning, his body was invaded by an invisible adversary leaving the four-year-old twisting uncontrollably on the bedroom floor. This was the beginning of a battle with epilepsy that he would fight for the rest of his life. Armed with a will to win and the martial arts, Gattone, now 30, is beating the odds.

Philip Gattone, Jr. had his first seizure at just 4-years-old.

“That night was just the start of it,” says Gattone, Jr. “I began having other types of seizures, called ‘Absence Seizures.’ “With that type of seizure, it looks almost like you’re daydreaming, but you’re wide awake.”

An Absence Seizure causes the individual’s eyes to flutter and, at times, cause the person to blank out. This type of seizure usually lasts between 15 to 30 seconds. But for a young boy who has no control over his body, those few seconds can feel like a lifetime.

“So, if anyone were watching me have an Absence Seizure, he or she probably wouldn’t know anything had just happened,” he explains. “I also have another kind of seizure called Complex Partial.

“A Complex Partial seizure produces involuntary movement and you also lose consciousness. When that happened to me, I’d smack my lips, pick at my clothes and have lots of small movements. But I would be completely unaware of what I was doing. These seizures would also last between 15 and 30 seconds.”

Gattone, Jr. would endure these assaults up to 200 times a day. Those episodes also had an adverse effect on his entire family, a fact the youngster was painfully aware of.

“It was very difficult for my parents,” he says. “They had no idea what to do to help me. We were living in Chicago at the time. They were going to different doctors trying to figure out what was going on without any success.

Most doctors said nothing could be done except one who offered brain surgery as a fix to the problem.

The surgeons removed two centimeters of the right side of Gattone, Jr.’s brain. It was a traumatic ordeal for anyone of any age, but especially terrifying for a child of four.

“The surgery seemed to help at first,” he explains. “But then, the seizures began coming back. The surgeons were trying to stop the seizure activity without removing any brain tissue. But it didn’t work.

“A year later, I had another brain surgery. This time, they removed the part of the brain that controlled the seizure activity.”

The surgery produced a measure of success in controlling Philip’s seizures. However, that success proved to be a double-edged sword, as it left him unable to speak. The future black belt also had trouble reading and writing. Following this second surgery, Gattone, Jr. had to relearn everything from A to Z!

After the surgeries Gattone Jr. started the first grade.

Even before both brain surgeries, I had a lot of cognitive issues,” he explains. “Before my second surgery, I actually stopped speaking at one point. Then, after the second operation, I had to learn how to speak and to read and write all over again.”

At school he required a full tie in class aide to help with his studies. This led to bullying by from other kids.

“Whenever I was being teased by other kids, and I was feeling bad or wasn’t doing well, I could always come home to my family. I have two younger brothers and a younger sister. They were always there for me to play with and to hang out. I don’t know where I’d be right now if it weren’t for them.”

After graduating college with honors from Southern Illinois University in Edwardsville, IL, with a degree in electrical and computer engineering, Gattone, Jr. moved east for a new job. It was then that he rekindled his interest in the martial arts.

“Martial arts was something that I’d always wanted to do and I didn’t want epilepsy to hold me back,” he says. “Just like playing football, martial arts training helps with my discipline and commitment to work and to enjoy life. Plus, it’s good exercise for me, too.

“When I was younger, in Chicago, I trained for a while in taekwondo because I was being bullied. I wanted to be able to defend myself, or at least know how to defend myself.”

Quite a few years passed between Gattone, Jr.’s ax kicks, but his desire to reenter the martial art field guided him to a new art form.

“I was originally looking for taekwondo, but found a school that teaches hapkido that caught my interest. I wanted to try that instead. The school is J.D.K. Martial Arts in Arlington, Virginia.”

He approached his hapkido training with the same zest and zeal that made him captain of his high school football team and winner of the Bulldog Award.

“The martial arts taught me to stay calm. Also, to realize that there are certain things I can’t control — and that I need to focus on what I can control.”

“The type of environment the martial art provides is like an embracing fraternity atmosphere,” Gattone, Sr. compares. “The students and instructors are all there to help and support each other.