Enter the Ninja: Add the Ninja Trix Program to Your School and Students Will Flip! 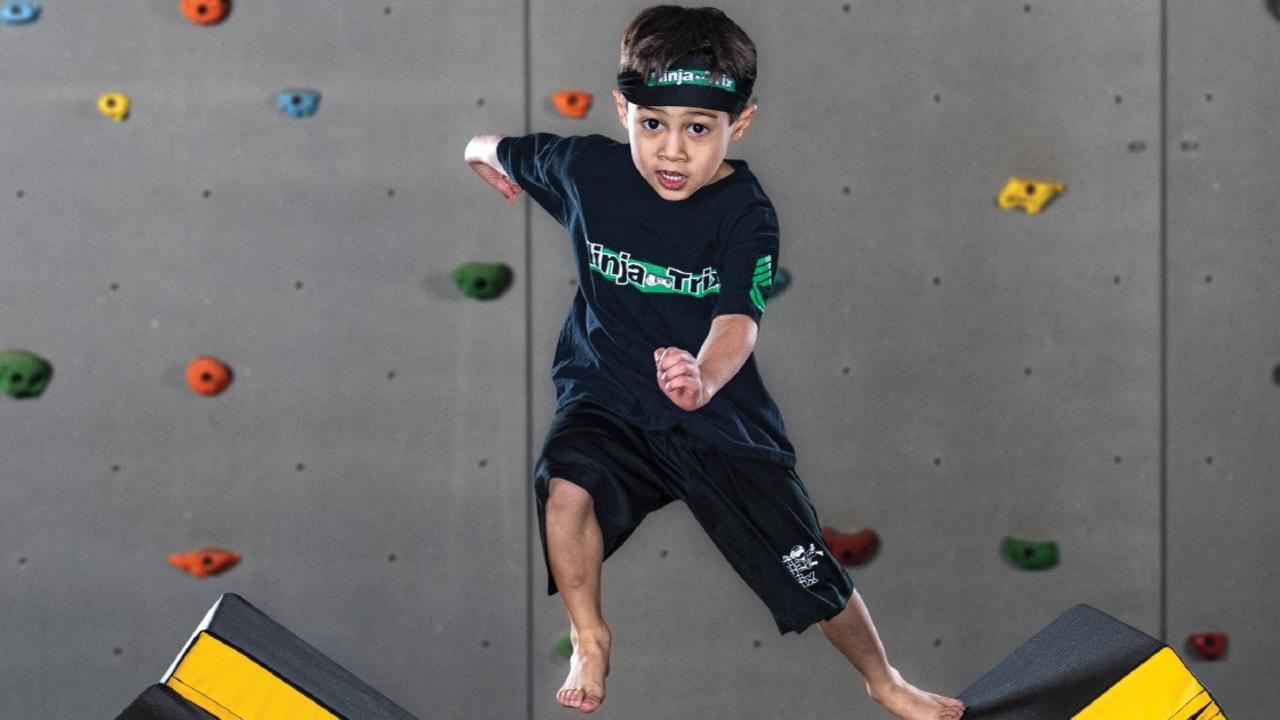 As a society, we’re fascinated by people who can contort and maneuver their bodies in extreme ways. One example of this comes from the Olympic Games. Every four years, we’re enthralled by the gymnastics competition. Our fascination with this one sport has resulted in more than 5 million of our kids enrolling in gymnastics programs every year.

Another example comes from cinema. We flock to theaters to watch martial arts/action heroes like Daniel Craig (James Bond), Keanu Reeves (John Wick) and Tom Cruise (Ethan Hunt in the Mission: Impossible movies) leap from building to building and flip vehicles end over end while kicking butt and taking names.

Our last example — and the most important one for this story — comes from a television series called American Ninja Warrior. On average, 7 million of us tune in every week to watch competitors push their bodies to the limit on obstacle courses that challenge them in aerobic and anerobic ways.

It was the popularity of this small-screen blockbuster that planted a seed in the mind of Florida school owner Steve Butts. While witnessing the growing popularity of American Ninja Warrior, he thought long and hard about why he was making his martial arts students put in two years of traditional training before they learned the flips and tricks needed for extreme-forms competition and cutting-edge demos. He wondered, Why can’t I offer a hybrid type of training that blends American Ninja Warrior moves and traditional martial arts and begins the very first moment the student steps on the mat?

The answer Butts gave himself: “I can offer such a program!” Thus Ninja Trix was born.

Appeal of the Ninja

Ninja Trix is a program that blends martial arts, gymnastics and obstacle-course training in a manner that lays a solid foundation of martial arts skills while meeting the youthful desire to jump, flip and “trick.” Instead of having to pick one physical pursuit or another, they can do all of them.

Perhaps most important, school owners like you can offer this exciting product to your current students while you market it to a larger demographic. Ninja Trix can function as a stand-alone program, an add-on program or an upgrade to your current programs. Additionally, it can add new and exciting skills to the repertoire of your demonstration team and your tournament competitors who are into extreme forms. Furthermore, it can generate a revenue stream that’s fed by monthly tuition, retail sales (for example, Ninja Trix T-shirts) and birthday parties.

As a school owner, you may be reluctant to add yet another program to what you already teach. Ninja Trix has taken steps to allay your fears. The company makes available to clients everything they will need, including a 24-month curriculum, class plans, marketing materials, uniforms and instructor training. The training comes with an online curriculum guide that teaches instructors how to run classes, as well as online videos that break down every skill in the program and, most important, describe ways to spot students so that should they fall while attempting a new move, injury is prevented.

Ninja Trix classes are designed to be taught in a progressive fashion to ensure that students transition safely from basic skills to advanced techniques. During the first six months, beginner classes are held three days a week and last one hour and 15 minutes. As student enrollment grows, the program can expand into a full schedule that features beginner, intermediate and advanced classes with up to 160 students, and it all takes just 10 hours a week. Every three months, students are graded during a branded Ninja Promotion Ceremony.

Success of the Ninja

To better appreciate just how successful the addition of Ninja Trix can be for a school owner, MASuccess chatted with Twila Schuler, owner of Rising Son Karate in Kirksville, Missouri.

A martial artist since she was 17, Schuler has a fourth-degree black belt in shotokan karate and a blue belt in Brazilian jiu-jitsu (she trained under former UFC champ Royce Gracie). Schuler spent several years working with Chuck Norris’ Kick Drugs Out of America (now KickStart), where she focused on assisting at-risk youth at Perry Middle School in Carrollton, Texas. Then she moved to Missouri to be closer to her mother and decided to open a school in Kirksville.

Schuler’s facility focuses on self-defense and the Christian faith. She says that much of her teaching revolves around character development as exemplified by the life of Christ. “Many parents have said they really appreciate that aspect of our program because it reinforces what they teach at home,” she said.

Her experience teaching in public schools and a private martial arts academy is key to her knowing what kids like — and what attracts them to Ninja Trix. “I’ve always loved creativity and thinking outside the box,” she said. “In my kid’s classes, I would add all kinds of obstacles to make it more exciting and adventurous for the students. I don’t mind change and trying new things, so the Ninja Trix program complemented everything I wanted to do but didn’t have the means [to try].”

She saw a significant uptick after launching Ninja Trix, and she attributes that to three truisms. First, kids love running, jumping and climbing — and they have the energy such endeavors require. Second, the program offers kids an opportunity to join an activity that’s less intimidating than a regular martial arts class. Third, some students who struggle with traditional martial arts classes find that Ninja Trix better suits their personality and needs.

Shortly after Schuler launched the program in Kirksville, kids began flocking to her school. “We doubled our income from just the Ninja Trix classes alone,” she said. “Pretty much now when new kids come, they want Ninja Trix over the regular martial arts program.”

Refinement of the Ninja

Schuler’s success with Ninja Trix stems in part from innovations she devised and implemented. For example, when a student learns a new move and is able to duplicate it, the student rings the school bell, which signals his or her classmates that a short victory dance is in order. Such practices boost the confidence of the successful student and motivate the others to conquer similarly challenging moves.

This combination of martial arts and play is paying huge dividends at Schuler’s school. “We offer … a special all-in-one deal which makes it affordable for the parents and irresistible for the kids,” she said. “They like the freedom of movement and climbing and jumping the best. The karate program is very tightly structured, and the Ninja Trix program, although very well-structured, offers them the chance to let loose and run out some energy in different, creative ways.”

One aspect of the program that’s turned into a veritable goldmine for Schuler is Ninja Trix birthday parties. Her birthday business has doubled, and on some weekends, her staff has had to decline bookings because demand exceeded supply.

“Parents [are] planning a year in advance for their child’s next birthday party,” she said. “Parents compare it to Chucky Cheese, and the kids say it’s even better. When we hear kids saying on multiple occasions, ‘This is the best birthday party I’ve ever been to,’ then we know we’ve done our job.

“Also, we’ve been told many times that when the kids wake up in the morning, they ask if it’s ninja day. Parents are happy, too, because their child sleeps really good the night after they’ve had Ninja Trix class.”

When speaking with Schuler, it becomes evident that she loves children and she loves enhancing their lives while they’re under her care. “The challenges, [when] taken in stages, help build confidence, and there’s nothing better than seeing a child reach a goal they didn’t believe would happen, and it carries over to other aspects of their life,” she said. “And when parents say they don’t have any problems motivating their kids to come to class, I’m happy about that.”

Schuler’s motivation to better the lives of children, coupled with her Christian faith, is inspired by the memory of her son Zac. Six years ago, Zac lost his battle with brain cancer when he was just 12. The youth was dedicated to helping pre-school students, and before he passed, he admonished his mother to never quit teaching.

Like Zac, Twila Schuler is dedicated to serving the needs of young martial artists, and she’s seen the value that a program like Ninja Trix can bring to a school. As a school owner, perhaps you’ve noticed rising interest in tricking and extreme forms and weapons among your students. If so, perhaps the time has come to pull these themes together, cash in on this revolutionary program and provide your students with something they will love. Who knows — you might see one of them in a future season of American Ninja Warrior!

Perry William Kelly has a sixth-degree black belt in jiu-jitsu and is an instructor in four other martial arts. He’s the former national coordinator for use of force for the Correctional Service of Canada. In 2017 he was a karate gold medalist at the World Police and Fire Games, and in 2018 he received the Joe Lewis Eternal Warrior Award. His website is perrywkelly.com.