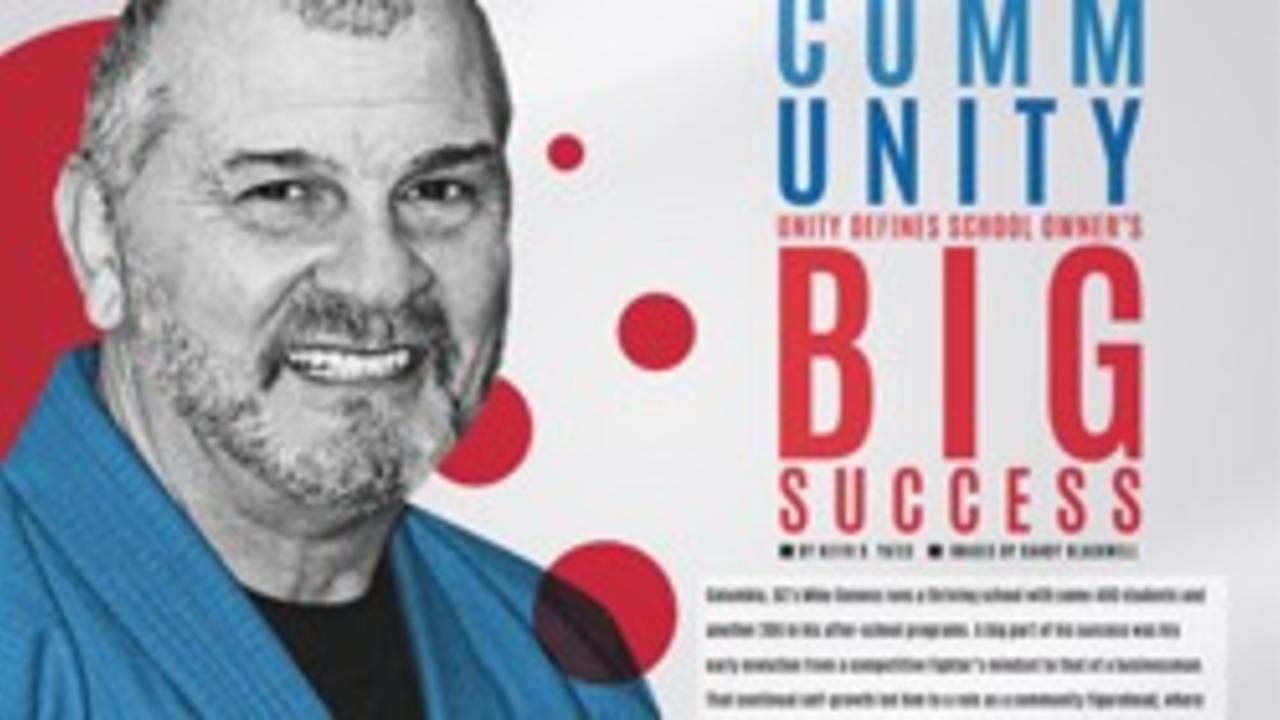 Columbia, SC’s Mike Genova runs a thriving school with some 400 students and another 200 in his after-school programs. A big part of his success was his early evolution from a competitive fighter’s mindset to that of a businessman. That continual self-growth led him to a role as a community figurehead, where Genova even extends help to other local martial arts school owners!

Mike Genova opened his Columbia, South Carolina martial arts school in 1975. He already had a reputation as a fierce, top-10-ranked fighter on the national tournament circuit and had trained regularly with the likes of Bruce Brutschy and Keith Vitali, who rose to prominence as America’s number-one-ranked semi-contact tournament champion.

At first, he primarily focused on teaching fighting techniques and winning trophies in competition but as he saw students start to drop out of the martial arts he took a different approach emphasizing not on fighting but on life skills.

“Today, I’ll ask my students what are the four most important things in life. They will answer, ‘God, family, health and education,’” says Genova.

He explains to his kids what each of those means.

“I tell them they must take care of their brothers and sisters. They have to have healthy habits. And, they have to be serious about their education, because that forms the foundation for what they are going to do with the rest of their lives.”

Genova admits he feels so much better today about achievements than he did in the 1970s and ‘80s, when he was competing and winning major fighting championships.

“Today, I have young black belts who might have just one or two trophies,” he explains. “But they are going to college for free because of scholarships they earned."

Genova sees his mission as helping not just his own karate students but all the children in his community. He currently works with 11 elementary schools and five pre-schools in his community, where he’s a regular and recognized figure.

“All the principals and school staff know me by sight,” he says. “I’m always telling them that I am available to do whatever they might need help on. If they need someone to help plant trees in the playground, I don’t send someone else. I am there myself. If I go to a school to eat lunch with the kids, they all call out, ‘Hey, Mr. Mike.’”

Genova has been active with local schools for decades teaching PE and martial arts but also talking about studying hard and goal setting.

Genova’s school is a little under 4,000 square feet, but he manages an enrollment of 400 active students with another 200 students in his after-school programs.

Like most modern schools, his student body is 80 percent children, although he does have dedicated adult classes and even yoga classes. Genova doesn’t use contracts and has a small staff he manages. When enrollment drops during the summer he makes up for it with summer camps.

“Right now, we have over 40 kids playing games and having fun in the building,” he points out. “And when school starts up again, we’ll get all the regulars back.”

Genova keeps his regulars by paying special attention to them and their parents.

“On any of my student’s birthdays, I will personally call them to wish them a happy birthday,” he says. “And I’ll give them a gift when they come to the school. That’s the way I know I am making an impact on their lives.”

He also has birthday parties not just for his students but kids in the community.

“I don’t do it for the advertising, I do it because I want to help the kids in our town. Everyone remembers it.”

Mike Genova is not only known in the public schools, but also throughout the metropolitan area of Columbia because of his tireless community outreach. He has long been involved with organizations like the Chamber of Commerce and Crime Stoppers and was even awarded the highest honor for a civilian from the state of South Carolina, the esteemed Silver Crescent, by the governor.

“I ask other school owners what they would do if Chuck Norris himself was coming to visit their location,” he poses. “Would you clean up your school, would you clean up yourself? Chuck may never come to Columbia, but I tell them, ‘You are Chuck Norris to your community. You represent the martial arts.’ You can’t look disheveled. You have to be presentable in person and in your behavior. You can’t be on the evening news for doing something silly,” he stresses.