A Lifetime of Achievement: Cynthia Rothrock and Her Rough-and-Tumble Journey in the Martial Arts 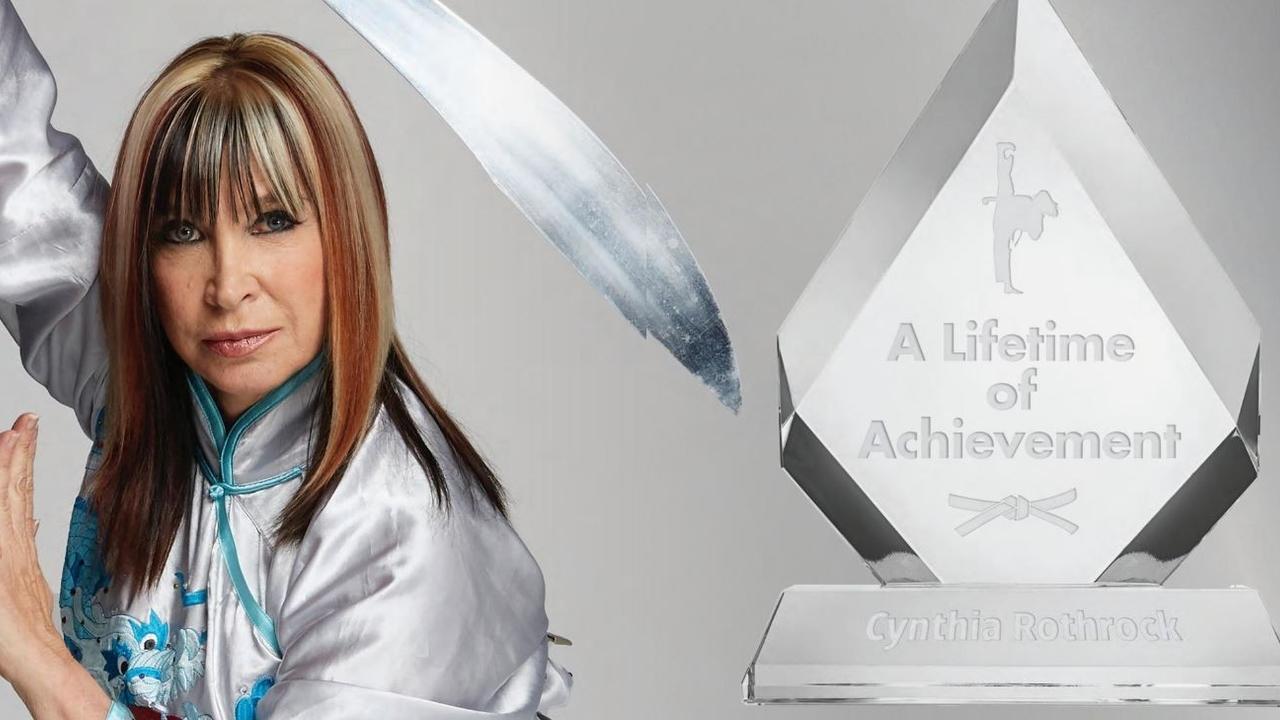 In the past four decades, Cynthia Rothrock has accomplished what many of us dream about but few of us achieve, and that is to nurture our traditional martial arts skills into an international career in fight films. Here’s a look back for those who are too young to have witnessed the rise of Rothrock.

Before she graced her first silver screen, young Cynthia Rothrock was a force to be reckoned with on the East Coast. She won numerous forms and sparring championships on the regional circuit, then graduated to the national scene, where she continued to dominate in weapons and kata. Known for blending disciplines — including tang soo do, taekwondo, eagle-claw kung fu, wushu and Shaolin kung fu — Rothrock used flashy moves that happened to catch the eye of a Chinese movie producer in 1983. Soon after, she found herself in Hong Kong starring in her first film.

It didn’t take long for the martial artist from Wilmington, Delaware, to parlay her tournament-honed skill set into on-screen success. She cultivated such a following that there’s still demand for Cynthia Rothrock movies around the world. Her accomplishments in acting shouldn’t be interpreted as evidence that she’s just a film fighter, however. At heart, she is still a … fighter.

“One of my go-to combinations when I was fighting in tournaments was to set my opponent up by doing a front kick with my right leg, and when [my opponents] would drop their guard to block it, I’d turn it into a roundhouse kick to the head,” Rothrock recalls. “I also liked to use my side kick a lot. I just looked for an opening and shot it in real fast.”

She still has a plethora of fighting moves in her arsenal thanks to her experience in those aforementioned arts. “One of the techniques from my wushu training is a trapping-hand counterpunch,” she says. “When my opponents have their arms up and stretched outward, I like to trap their hand with my right, then with a lot of speed, I hit their front hand with my left and come in with a backfist.”

Recognizing the advantages that accuracy and explosiveness could confer, Rothrock long ago decided to transform herself into a better athlete and vowed to be in top physical shape for every match and performance. That further polished her fighting method. “I moved quickly, faking with one technique and hitting with another,” she says. “The instant they bit on my first technique, I’d shift my position and attack in a way they weren’t expecting.”

Yes, point fighting is exciting to watch with its kicks and punches that can score in the blink of an eye, but we all know that on the street, no points are awarded for finesse and the loser doesn’t walk away with a consolation prize. To Rothrock’s credit, her roots in the traditional arts kept her from ever thinking that success on a tournament mat translates to success in a dark alley.

The attributes you develop in competition aren’t entirely useless, she notes. “Tournament fighters are trained to move fast, to get in and out quickly while scoring a point in the process. So traditional tournament fighting is really good to help you with your reflexes and help you avoid something that’s coming at you fast.”

Furthermore, she’s quick to point out that a kick is still a kick and a punch is still a punch. If you land any technique with speed and power — especially if you hit a vital point on the body — it has the potential to take out an opponent.

“Potential” is the key word there, and that’s fine because not every martial artist trains for combat. “Traditional fighters are sportsmen and sportswomen; they’re guided by rules and regulations,” she says. “It isn’t a fight to the death. There is the occasional broken nose, lots of jammed toes and [even] knockouts. But tournaments can’t be compared to a street fight because we have a code of conduct and rules to follow — even MMA fighters. That’s one big difference between a professional fight and a brawl.”

Despite the obvious differences between movies and the street, Rothrock has always fought to keep her action scenes as realistic as possible. The quality of the result, she says, depends in large part on whether the film is from Hong Kong or Hollywood.

In the States, most action films benefit from having adequate rehearsal time built into the production schedule, from having access to state-of-the-art safety gear and from employing an experienced stunt coordinator. In Hong Kong, however, many safety practices get tossed out the window, leaving it up to the star to do the stunt in one or two takes. In contrast, a Hollywood production might spend a whole day getting one fight just right.

“There were a couple of times when I thought I was going to get killed while filming in Hong Kong — I did some pretty dangerous stuff there,” Rothrock says. “[In Yes, Madam!], I had to fight eight guys with weapons. I turned to do a block, and the guy accidently hit me in the nose with his sword. My eyes started to water, and my nose turned red. The director came over and said, ‘That’s OK, your nose looks better now,’ and we kept filming.”

That bashed beak was a walk in the park compared to what another Hong Kong director asked his American star to do. “In the movie, which was Lady Reporter (also released as Female Reporter), they wanted me to jump off a two-story building in high heels with a fake baby in my arms,” Rothrock says. “That was hard enough, but there was also going to be an explosion behind me.

“The director said, ‘If you don’t jump when I say action, the flames are going to hit you.’ This was the first high jump I’d ever done, and they had me landing on a stack of cardboard boxes. We didn’t have big air mats that let you land nice and soft. I was really nervous. When he said action, I felt the heat of the flames, so I jumped — in my heels and with the fake baby, landing on the cardboard.”

On impact, Rothrock’s knee smacked her squarely in the nose. Her vision blurred, and the pain nearly caused her to pass out. She thought her nose was broken.

“I was a martial artist, not a stuntperson,” she says. “Nobody taught me how to jump off a two-story building in heels while holding a fake baby. Then the director decided he didn’t like the camera angle, so we had to do it again!

“So now I was extremely petrified and nervous because I knew I had almost knocked myself out and nearly broken my nose. This time, the director said I had to once again jump off the ledge in high heels, holding the fake baby — but he told me not to bounce when I landed. He wanted me to stick the landing like a gymnast.”

Like a trooper, Rothrock did everything the director asked, but that evening, she paid a high price. “I started feeling as if I was going to pass out,” she says. “I went to the doctor, and he said, ‘You’ll be OK — you just jumbled all your internal organs.’ I was like, ‘What?! Jumbled organs don’t sound like everything’s OK!’”

Rothrock went back to her room but couldn’t sleep. “I kept thinking that they were going to lose the film or someone was going to steal it — or maybe a goat was going to eat it,” she says, laughing. “I just knew I was going to have to do that scene again.”

Fortunately for the film fighter, the footage didn’t get misplaced, purloined or digested. The Hong Kong premiere was a success, and it propelled her farther along the road to stardom. It also drove home the notion that even though she was no longer taking a beating in the dojo, punishment was par for the course if she wanted a career in action movies.

Terry L. Wilson is a freelance writer and jujitsu practitioner based in San Diego.