6 Business Secrets I Learned Surviving Naked On a Mountain! 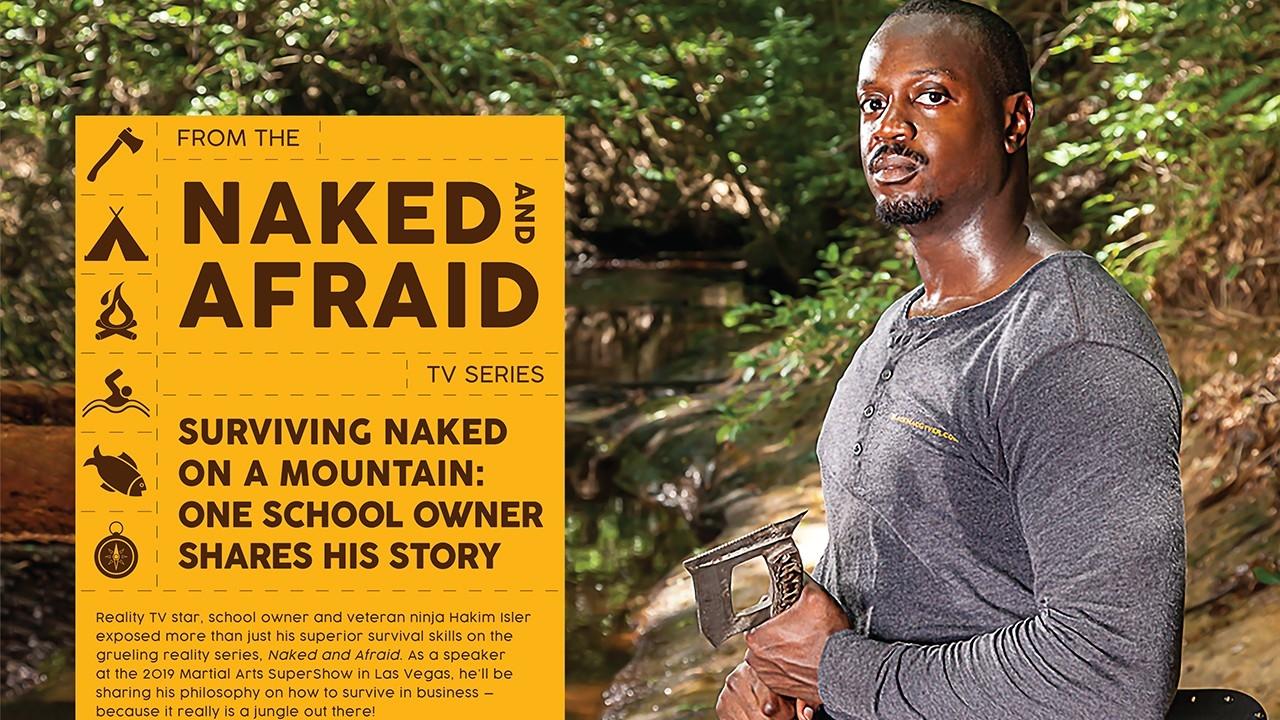 Veteran ninja Hakim Isler had very little interest in becoming a celebrity when he submitted an application to the producers of the hit reality television series Naked and Afraid.

What started as a good-natured verbal sparring contest between a ninja and his Special Forces buddy evolved into one of the most exciting episodes in the history of the show. It also launched Isler onto a new career path as a TV celebrity, survival instructor, public speaker and survival-course creator.

“I contacted the show as a joke because a Special Forces friend of mine dared me to do it,” explains Isler. It was one Alpha male daring another Alpha male. So that night I went online and filled out an application form for the show.”

Predictably, the producers of Naked and Afraid jumped at the chance to have a real-life ninja who was also a Psychological Operations soldier and survival specialist on their survival series.

The show’s concept is simple but brutal. Complete strangers — usually a man and a woman — meet in a very unique way: They're stranded in a dangerous, desolate location, without food or water, and they're completely naked.

Each episode follows the adventurers as they attempt to survive on their own with nothing but a personal item and the knowledge that the only prize is their pride and sense of accomplishment. Because there is no other choice, competitors quickly get to know one another — and their surroundings — and hope that their instincts, survival skills and intestinal fortitude serve them well.

So, in 2013, Isler and his female partner found themselves isolated in one of the most inhospitable environments in the world: On top of a mountain in the Himalayans! Surviving this challenge would become a harrowing ordeal with life-threatening consequences!

The first task was to live up to the show’s title by stripping down to their birthday suits. Being naked in a survival situation was the first task for the team to overcome.

“Taking off my clothes was contrary to all of my survival training,” says Isler. “When you’re in a survival scenario, the first layer of shelter is your clothing. So, being naked automatically puts you in a very dire state of affairs.

“When I did survival training in the military, I always had something to work with. We were taught to improvise and overcome. For example, I could use my shoelaces or something off my rucksack, or I could use pieces of my parachute. But in the show, all that was gone.

“It really puts things in perspective,” Isler says, “which goes along with the producers’ inspiration for the concept of the show — Adam and Eve from the Bible. One guy, one girl, both naked. Can they really survive in the world with nothing except their wits? For me, this was the ultimate challenge.”

Isolation can be a cruel mistress. Living in a world filled with distractions becomes the norm. But when all that is taken away, you only have yourself to deal with. Survival becomes a challenge that uses all of an individual’s will to overcome, and the ability to focus on what is important and what isn’t. This is where Isler’s ninja training paid off.

“I saw who I was to the bare core,” says Isler. “When you strip away all the distractions, the cell phones, no clothing, no fast food, no Internet, and all you have is yourself 24 hours a day, seven days a week – when that happens you really begin to understand who you are.

“This allowed me to test myself and to discover to what level I could achieve and still be able to come out okay. Being able to overcome and to survive is a very strong aspect of the nin in ninja, which means to ‘endure and preserve.’

“In that situation, I developed a deep connection with what a person really needs to make it from one day to the next, along with a clarity about what’s important in life. That becomes a driving force for survival whether you’re on a mountain top or in business. Survival is survival!”

At age 41, Isler has amassed an impressive resume in martial arts, the military, the media and business. Combining this total skill set, Isler has come full circle as a sought-after speaker, author and martial arts instructor.

“I own Elevo Dynamics in Fayetteville, North Carolina,” he says. “Elevo is a hybrid word I designed, meaning ‘elevate and evolve.’ I call it the first Dojym (‘dojo’ plus ‘gym’) in America. We teach to-shin do ninjutsu, which is ninja self-defense.

“To-shin do was created by Stephen K. Hayes and is a contemporary form of taijutsu, a complete system of self-protection as practiced by Japan’s legendary ninja shadow warriors. I also do kali and silat.

“Our programs emphasize intelligence in motion as opposed to relying on sheer strength, superior speed and flexibility. To-shin do, or modern ninjutsu, is based on science, natural movement and responses.”

Isler is also a published author on the topic of modern hand-to-hand, close-quarters combat methods. It’s a book about using the ancient armored-combat principles of the samurai, to build the foundation of a fighting methodology for the modern armored warrior (soldiers, law enforcement officials, etc.).

In addition, he’s written two books: Ninja Survival: Wilderness Edition is a survival book based on ninja concepts from the past and how they relate and can be used in present day wilderness survival.

The other book is The Business of Survival. It teaches lessons of modern business success based on the foundations of survival strategies – strategies, Isler says, that allowed our human ancestors to thrive in the wild, and leading to the modern lives we now enjoy.

Isler also runs a summer and year-round camp program that he offers to school owners as an additional revenue stream. The program, Ninja Survival Camp, features a unique curriculum that teaches survival and self-reliance skill in an unusual way based on ninja tradition.

The Naked Truth About Running a Business!

Isler served four years in the army and was prepared to go the distance with aspirations of trying out for Delta Force. But military life and long deployments had taken a toll on his marriage. His wife drew a line in the sand: He could serve Uncle Sam or be with her, but not both. Isler chose to save his marriage and did an about-face on his military ambitions in order to open his gym and martial arts school.

It was 2008 when Isler traded in his Class-A uniform for civilian attire. Unfortunately for Isler, the country was in the midst of a nasty recession and business loans were few and far between.

“I found a loan. It wasn’t enough to sustain me finically, but it was enough to open a school,” Isler explains. “My wife and I agreed that we would live off her salary for a few months until I could get the school off the ground. But three months into the business, she left me. I had no way to pay for anything. I was completely naked.

“I had no job, was three months out of the military. I had a $60,000 loan that I had to pay on because all the money went into opening the [gym] business. I had two houses and two cars in my name and no way to pay for them. So, you want to talk about being naked and afraid… that was the epitome of being nude!

“In business, you must have a drive to push forward, or else you’re going to give up at the first bump in the road you come to. So, understanding your nature and how you operate is important. I call it the process of ‘finding your nature through nature,’ and that’s another topic I will cover at the SuperShow.”

Making the correct split-second decision in combat is the ultimate survival mindset. This is another aspect of his military and martial arts training that Isler translates into a business ideology he coined, the “Deciding Factor.”

He gives the following example:

“[On the TV show,] my partner and I had this huge debate over what we should do first,” he says. “Should it be fire or shelter? I told her that it would be very difficult to keep a fire burning overnight on the side of a Himalayan mountain, especially with the threat of heavy rainfall. But I could build a shelter to protect us from the cold and rain, allowing us to survive the night.

“To really be good at business and to be really good at survival, you need to recognize opportunities and be very organized in the way you approach them. These are a couple of the things I’ll be addressing at the SuperShow.”

Isler’s Naked and Afraid partner was a self-trained survivalist. She had a talent for foraging, an attribute Isler said was essential in the wilderness as well as in a business-building scenario.

“My partner and I had some tough times, and that’s okay because we’re all different,” Isler points out. “Her strength was in foraging; she knew how to identify plants that we could eat. On several occasions, she found some strawberries. Even though they didn’t have much caloric value, it was a treat to eat and it did wonders for our mental state. It was a big deal. We savored those tiny strawberries.

“Those strawberries were a great motivator and morale builder,” he adds. “I often think of these strawberries in terms of business as well. In business, you have to be able to widen and narrow your focus. As the world changes, you must be able to identify different opportunities, just like my partner identified that tiny and hard-to-find food source we needed to survive.

“In this same vein however, not every opportunity is a good one. For example, if I’d identified a berry as something that was safe to eat, but it wasn’t, and I ate it, I could die. Or it could make me sick, degrading my potential survivability so much that I couldn’t recover.”

A Lesson Plan for Surviving in Business

“During my time surviving in the most extreme conditions, similar to those of early man, I came to the realization that surviving the wilderness is similar to surviving the challenges of business,” says Isler.

“I came to recognize that early humans were nothing less than the first entrepreneurs. They lived every day with a new set of challenges and struggles, with one main goal. First, survival, and, second, to thrive and to improve and protect themselves and the lives of their loved ones.

“While naked on a mountain, I found a connection in the processes needed to survive, and those which my business needed to be successful. I now share this process as a means to help others look closer at their business, and trim the things that would hurt their business and to decipher the things that will make it better. I cover this briefly in my speeches, but more in-depth with specific action plans in my book, The Business of Survival.

“These strategies will help anyone discern and solve common business problems using methods that successfully brought man to where we are today. My six lessons are:

San Diego’s Terry L. Wilson is a freelance writer and multi-Emmy Award-winning TV personality. He can be contacted at [email protected]